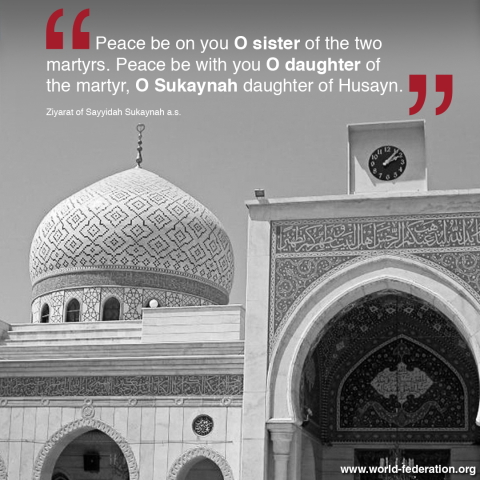 Bibi Sakina (sa) was the young daughter of Imam Husayn (as), who had to witness the oppression of her father at such a young age on the plains of Karbala before being tormented in Shaam.

From birth, Bibi Sakina (sa) was extremely fond of her father, similar to the unfaltering love between any young girl and her father. Bibi Sakina (sa) was known to have adopted traits from her beloved father which naturally made her the individual that would light up any room in which she entered. Her generosity towards those around her and selflessness was a direct representation of the traits of Aba Abdillah al-Husayn.

Following the martyrdom of the Imam, the tyrannical forces of Yazid’s army violated the women and children of Aba Abdillah, and it is narrated that the animal known as Shimr, ripped the earrings from the very lobes of this little girl whilst she wept for her father. It is said that as tears flowed down from her eyes and blood down her face, she ran out of the tents and towards the battlefield. It is narrated that Bibi Sakina (sa) ran towards the direction of her father's bod so that she could lay on the chest of her father to seek comfort. When she was asked how she recognised her father's decapitated body she said “When I was running aimlessly in the desert I thought I heard my father’s voice telling me he was here, Ilaiya Ilaiya Sakina.”

Whilst imprisoned in Shaam, Bibi Sakina (sa) woke one night weeping for her father, upon hearing the commotion Yazid sent his men to go and investigate, and upon doing so Yazid instructed his men to take a tray into the prison. Bibi Sakina (sa) saw the tray and immediately screamed that she is not hungry, she just longs to see her father. At this moment the cover was lifted and the bloodied face of her father was revealed. The wailing stopped and she threw herself over the decapitated head of Aba Abdillah. Moments after laying there pressing her cheek against the holy cheek of her father, the sobbing stopped. Bibi Zaynab (sa) felt the skin of the girl, and to her horror the skin of the daughter of imam Hussein was ice cold. She had passed away within the imprisonment of Yazid in Shaam, out of sorrow for her father. This is the extent of the love she had for the dear Imam.

This small book contains
*** Main causes of a person being rich or poor;
*** Advantages and disadvantages of being rich and poor;
*** Remedies and solution to financial problems;
*** And much more.