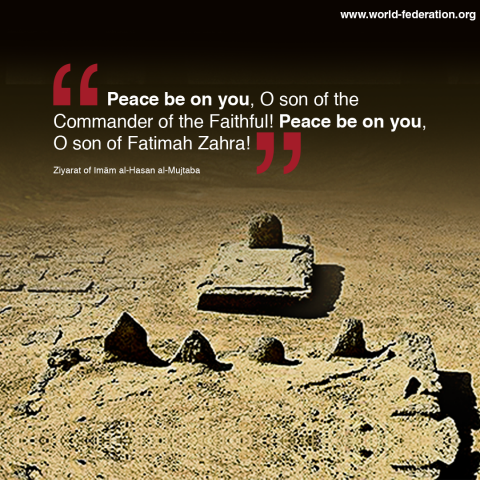 Date & Place of Birth:  Medina, on the night of the middle day of the month of Ramadan, three years after the hijra (624).

Imam Hasan (as) was the son of the first Imam of the Shia, the commander of the faithful. Following his father's passing, Imam Hasan (as) rightfully assumed his right to command over his father's followers who soon pledged their allegiance to him. Imam Hasan, as named by his grandfather the Holy Prophet of Islam, was said to have had the greatest resemblance of the Prophet. Fatima (sa), brought her two sons Hasan and Hussein to the Prophet of Islam during the period where the Prophet was on his deathbed. The Prophet stated that his inheritance to al-Hasan was that the attributes of al-Hasan mirrored that of the Prophet's own form and nobility.

After Imam Hasan (as) took over succession from his father, he encountered a difficult period of khilafa. Muawiya attempted to send spies to infiltrate the organisations of Imam Hasan (as) and plan assassinations. Imam gained knowledge of these spies sent by Muawiya and communication began between the two individuals. Imam wrote to Muawiya saying that the act of sending spies was that of a message asking for war. Muawiya soon, after a few more corresponding letters, set off towards Iraq. Imam Hasan (as) saw this as an act of war and began gathering troops and soldiers to fight Muawiya. Through the course of this action, Imam gathered the army that he had brought together from Shias, to tribal members of no religious intent but hatred for Muawiya, and addressed the people. He knew in his heart that there were some disloyal members within his army and therefore when he addressed them, he wanted to separate the faithful from the disloyal. He did this by giving a speech in which he painted a picture to the people that he was going to call a truce with Muawiya in order to avoid bloodshed. He made the people think he was going to give up his position to Muawiya. The unfaithful ones amongst the army were alarmed, and few loyal Shias of his own, and that of his father’s protected him from the imminent attack from his own army following the speech he just gave.

Following the disintegration of his army, he was now unfit to rival Muawiya and hence was in a position where he had no choice other than to sign a treaty with Muawiya. Within this treaty, Muawiya promised many things to Imam including protection for his Shia. Although the Imam was aware that this tyrant was not a man of his word, and would only observe the treaty until he sees fit, he had no choice but to sign it.

Muawiya continued towards Kufa, gained the pledge of allegiance from its residence, and openly announced on a pulpit that he will no longer obey the treaty made between him and Imam Hasan (as).

Upon hearing this, Imam left for the city of Medina. He resided there and 10 years elapsed with Muawiya remaining in a place of power amongst the people after which he then passed down the position to his son, Yazid ibn Muawiya.

Communication between Muawiya and the wife of Imam Hasan (as), Ju’da, and used a 100,000 dirham bribe and the promise of a marriage between her and Yazid, for the price of poisoning her husband Imam Hasan (as). This enemy of Allah was influenced by the Tyrant and thus carried out the deed of making Imam ingest poison. Later on, after she did what Muawiyah asked of her, he told her that if she was able to poison her husband then why would he let such a woman marry his own son.

Click here to Apply for the Couples Retreat in Iran 2019. Deadline extended.