Buy Towards The Eternal Life here

A book that takes a more rational and logical approach in viewing the journey ‘Towards Eternal Life’ has been officially released. The book questions “What is to come after death? Where will one go? To a bigger world or a smaller one? Better or Worse?”

The book is an effort to explore what Prophet Muhammad (S) told us about this journey ‘Towards Eternal Life’. It attempts to “draw a brief sketch so that we may get a notion of this journey, and more importantly so that we may prepare the provisions that we shall need along the way”.

Many have pondered on the human spirit and what happens to this spirit of a human when the curtains to this world draw to a close. Do we have an extended existence?

Curiosity of what happens after death will always intrigue humankind. What is man after all? Is he simply a bundle of flesh, blood and bones that struts through this world with some grey matter in his skull? Or is there more to the journey of a human being?

An excerpt from the book - “That which you shall read in this book is a small effort to portray the path that a human being must traverse after he leaves this world (dunya) and continue on the journey towards His Lord. It is an attempt to discover the impact of our conduct in dunya on the various stages of that journey which will culminate with the meeting with God. It is an effort to unravel the mystery of man’s reality and his ultimate destination.”

A highly recommended book in going through a systematic but thought provoking topic ‘Towards Eternal Life’!!

Towards Eternal Life’ is now available to buy www.wfshop.org. 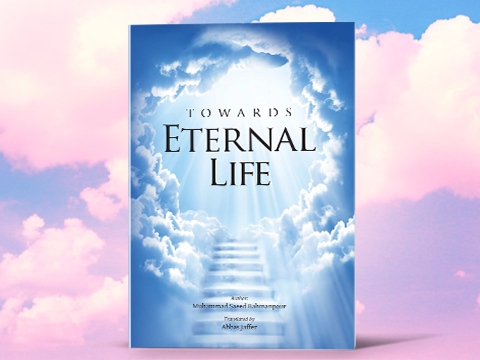 Shaykh Mohammad Saeed Bahmanpour has studied sociology at LSE and Tabatabai University of Tehran in which he has obtained a Master’s degree.  His interest in sociology was not an intrinsic interest but to answer a call from within to know more about religions. That call eventually took charge of his life and directed him to study religion in depth in Tehran and Qum seminaries and to assume clerical duties.

In 1999 Shaykh Mohammad Saeed Bahmanpour was invited to Cambridge University to teach as a visiting lecturer in the Faculty of Oriental Studies. Later he was appointed as the principal of The Islamic College in London which has both seminary and university degrees on its educational programs. He was in that post for four years. He has taught Islamic studies both in seminary and university courses for a long time before, during and after his post at the Islamic College.

Shaykh Mohammad Saeed Bahmanpour’s fields of interest are theology, Islamic mysticism, and Qur'anic sciences and exegeses, including its history and compilation.

Currently, he is the director of inter-faith relations at the Islamic Centre of England.

He is also interested in the history of Jesus and Mary from an Islamic perspective and has written a screenplay about the life of Mary based on the Islamic sources, which was made into a successful movie. Another of his works on Christian history was the screenplay about The Seven Sleepers of the Cave (Ashab al-Kahf).

Shaykh Bahmanpour has authored several books including Muslim Identity in the 21st Century, ed. (2001), The Idols Will Fall (2010), The Blessed Tree: The Life and Times of Fatima Daughter of Muhammad (2011) and Towards Eternal Life (2015).

Abbas Jaffer is an optometrist by profession. His special interests are diabetes and glaucoma, and he is based in his private practice in Harrow.

He also has a Master’s degree in Islamic Sciences. He is active in the Madressa and is a Zakir of Imam al-Husain (A).

Abbas is a part time lecturer at the Islamic College and is currently writing his doctoral thesis on the “Challenges faced by Educators of young Muslims in Modern day Britain.”

Abbas has co-authored with his wife Masuma a book on “Qur’anic Sciences” for the Islamic College and has translated several works, mainly from Persian into English.

Abbas lives in London, England, with his wife and three children.

The World Federation is pleased to announce the availability of a new title: Book 1 of the most significant Shia collection of hadith: Al-Kafi, compiled by marhum Kulayni (ra).

In March 2020, we successfully printed 2000 copies of ''156 Questions and Answers About the Teachings of Islam in Bosnian language.

The Qum Office was honored with the visit of Sheikh Mohammed Ali Ismail, ex-manager of The World Federation Qum office. A meeting was held between Head of Islamic Education, Sheikh Kumail Rajani and Sheikh Ismail.