Day One Introduction to Shahr Ramadan

The first 5 videos is are introduction to the Holy Month of Ramadan.

Take part in the daily refelection\challenge to help you get closer to Allah (swt). 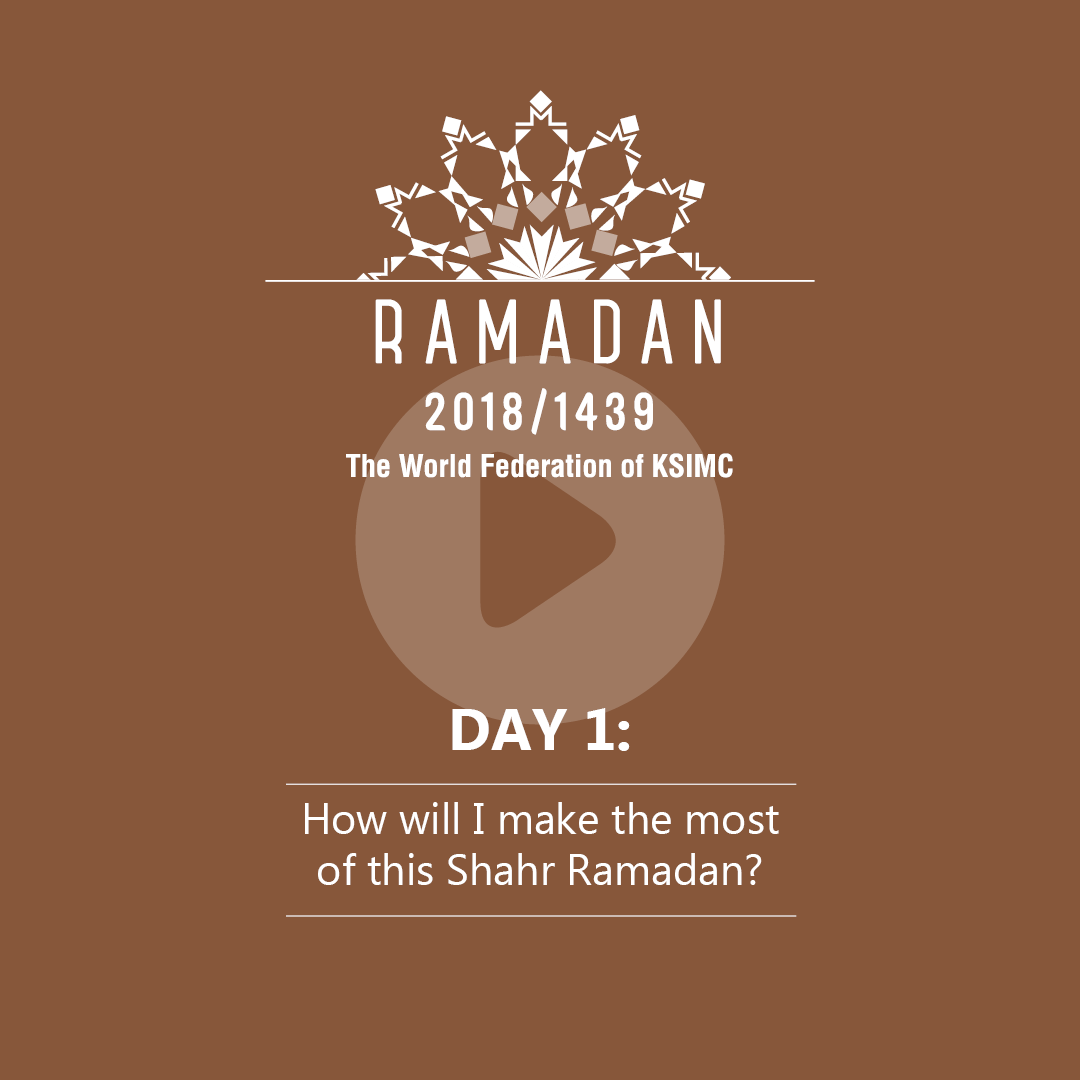 The month of Ramaḍan is one in which the Qur'an was sent down as guidance to mankind, with manifest proofs of guidance and the Criterion. So let those of you who witness it fast [in] it, and as for someone who is sick or on a journey, let it be a [similar] number of other days. Allah desires ease for you, and He does not desire hardship for you, and so that you may complete the number, and magnify Allah for guiding you, and that you may give thanks.

The word Ramaḍan comes from the root word Ramaḍa which means to burn; although it refers to a burning that is not accompanied by smoke or ashes. The reason why this month has been named such is that in this month, man's sins are burned away.

This is the month in which the Quran was revealed, it is the only month whose name is mentioned in the Quran and the Night of Qadr is also in this month.

In the month of Ramaḍan the believers have been invited to be Allah's guests and this banquet has some particular characteristics:

1. The host is Allah and He has personally invited the guests

2. The means of reception is through the Night of Qadr, the revelation of the Quran, the descending of angels, the acceptance of du'as, the temperance of the soul and separation from the fire of Hell

3. The time of reception is the month of Ramaḍan which according to hadith, is a month the beginning of which is mercy, the middle forgiveness and the end is a reward

4. The circumstances of reception: the Night of Qadr is a night in which the needs of a thousand years of the guests is provided and the world is adorned through the descent of angels on the Night of Qadr

This banquet is not like the banquets of this world. Allah the all-knowing, creator, magnificent etc. is the host of ignorant, poor, needy, created, finite and lowly people and tells them: I will grant your prayers and for every breath that you take in this month, I will reward you with the reward of glorification (tasbih).

The condition for attending this banquet is not just bearing hunger. It has been narrated in a hadith that one who disobeys the divine leaders or behaves badly with his spouse in personal and family matters and is unkind or does not fulfill his/her lawful needs or if his parents are unhappy with him, his fasting is not accepted and he has not fulfilled the conditions of this banquet. Although fasting has many health benefits but waking up before dawn, gentleness of the soul and acceptance of prayers in the month of Ramaḍan is something else and the real deprived is one who is deprived of all this goodness and blessings.

The reason why the month of Ramaḍan has been chosen for fasting is because it has superiority over all other months; in the verse under discussion the reason for its superiority has been mentioned as the fact that the Quran which is a book of guidance and is the "furqan" which means that through its commands and laws it separates the correct methods from the incorrect, and guarantees the happiness of man, has been revealed in this month and it has been narrated in hadith that all of the heavenly books: Torah, Injil, Zabur, Suhuf and Quran, have been revealed in this month.

On the last Friday of the month of Sha'ban, the Prophet (s) gave a sermon in order to prepare his companions to welcome this month and spoke of the importance of this month: "O People! Indeed ahead of you is the blessed month of Allah; a month of blessing, mercy and forgiveness; a month which with Allah is the best of months; its days, the best of days, its nights, the best of nights, and its hours, the best of hours. It is the month which invites you to be the guests of Allah and invites you to be one of those near to Him. Each breath you take glorifies him; your sleep is worship, your deeds are accepted and your supplications are answered.

So, ask Allah, your Lord; to give you a sound body and an enlightened heart so you may be able to fast and recite his book, for only he is unhappy who is devoid of Allah’s forgiveness during this great month…" (In order to read the whole sermon you may refer to the following site: https://www.al-islam.org/supplications-month-ramadhan/sermon-given-prophet-s-last-friday-shaban-reception-month-ramadhan).

The final article in The Labayk Series looks at people's most memorable moments from the entire Hajj experience.

The World Federation of KSIMC is facilitating payments for Zakat al-Fitrah, Fidyah and Kaffarah. ZAKAT AL-FITRAH - £5 per person. FIDYAH - £1.50 per fast. KAFFARAH - £90 per fast.

Day Fifteen Feed Your Soul The Status of Imam Hasan as

The World Federation is pleased to introduce a series of videos to help us acquire closeness to Allah (swt). The first 5 videos will be an Introduction to Shahr Ramadan and for the rest of the Holy month we will focus on Akhlaq. Click here to watch Day 15.