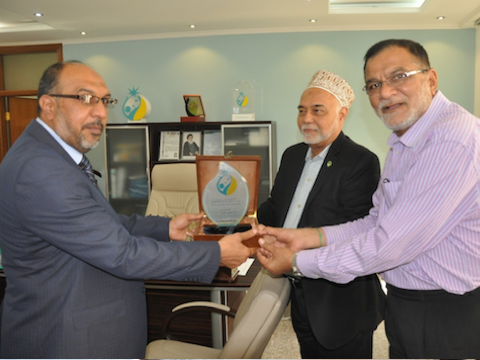 Dr Asgar Moledina, President of The World Federation, recently visited Iraq over the Easter period.  During his ziyarat trip, he met with many individuals and organisations in Najaf and Baghdad, including His Eminence Grand Ayatullah Syed Ali Huseini Al Sistani (DA).

The World Federation has been working with Al Ayn Foundation for a short while now and Dr Moledina and Anverbhai Dharamsi spent the greater part of the morning and afternoon with them to see some of the work that the organisation was doing and meet some of the thousands of families that they were assisting in Iraq.

Alhamdullilah, through the support of donors and organisations such as The World Federation, Al Ayn Foundation is currently supporting 25,728 orphans in Iraq!

‘It was a fantastic experience to spend one full day with Al Ayn Foundation in Najaf.  Their organisation, management team and level of reporting and accountability is superb.  They work under the patronage of Ayatullah Sistani and I thank Allah (swt) for giving me this opportunity to see first-hand the work that they are doing and meet some of the team.  We also discussed other opportunities to work together with them and how we can provide long-term humanitarian aid to the families in Iraq’

Dr Moledina explained more widely some of the work that The World Federation is doing around the world and the history of the Khoja community. It was no surprise that both the leaders had special memories of Late MULLA ASGHERALI M M JAFFER and recalled the great humanitarian work undertaken by The World Federation under the leadership of  Late  Mulla Saheb with appreciation and praise.