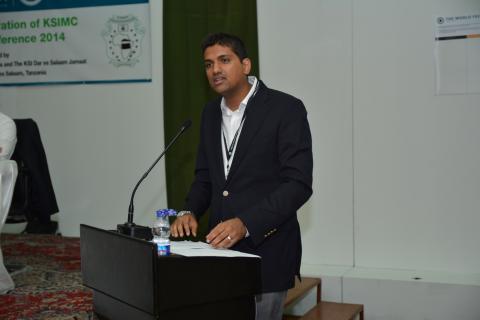 It has been confirmed that the Secretary General of The World Federation, Shan-E-Abbas Hassam will inshAllah be stepping down from his role.

We have received many messages of support and thanks for Shan-E-Abbas and this week, we share some of these messages.

Words may not suffice to express how deeply I feel about my dear young brother, Shan- E-Abbas Hassam, who addresses me as Aunali Uncle ever since we knew each other, and more closely since 2010, when he visited Dar es Salaam during the Africa Federation Conference which was hosted by Dar es Salaam Jamaat. Since that moment, I could see the luminosity of a rising star in our community, this is non-other than the young and dynamic Shan-E-Abbas Hassam, born in a family of kind hearted people who value human life and who have compassion towards the underprivileged.

From a Deputy Secretary General, Executive Councillor and ASG of Relief, Shan took up the most demanding and challenging post of the Secretary General of The World Federation – the parent body, in July 2011. During the last 5 years, he demonstrated great responsibility and ability in dealing with diverse issues and situations that emerged from various corners of the world, be it Africa, Europe, America, Far East or Middle East.

The most note-worthy qualities Shan possesses are his intellectual and analytic capacity, his communication and listening skills, and his sincerity in fulfilling his promises.

During his tenure as the Secretary General, he conducted the Conferences and Executive Council Meetings of The World Federation diligently, showing his aptness and restrain during the most difficult moments of the deliberations, and managing to steer the meetings successfully in attaining the ultimate objectives most of the time.

A person ingrained with dynamism and passion to the cause of the development of the Khoja community worldwide, Shan’s involvement in fund raising and relief assistance to the underprivileged and needy families touched many hearts, more so for his outreach efforts, warmth and compassion towards this noble cause.

I wish Shan-E-Abbas, his young family and his upcoming business ventures every success. I pray to Allah (SWT) to shower His choicest blessings and mercy to Shan and his family members for good health, long and happy life, Ameen.

Ending this letter with a beautiful quotation by Albert Einstein:

“Only the individual can think, and thereby create new values for society, nay, even set up new moral standards to which the life of the community conforms. ... The ideals which have lighted my way, and time after time have given me new courage to face life cheerfully, have been Kindness, Beauty and Truth.”(Albert Einstein, 1954)

It is very rare that one gets the opportunity to work with an outstanding young individual who possess all the leadership qualities. I have been lucky to be associated with Hussaini Foundation as Chief Coordinator and to work with brother Shan-e-Abbas since his early days with The World Federation in a different field of Disaster and Relief for Pakistan.

Indeed he has a soft spot for Pakistan and always ensures the maximum support to Pakistan. His live TV Programme to raise funds for Pakistan sectarian victims and their families, assisting flood victims, building Islamic Centres and other charitable activities / programmes is an evidence to this.

I look forward to his return in very near future as a key member of The World Federation with a higher position inshAllah (Aameen).

Shan-e-Abbas all the best and I pray for your prosperity with best of health and please be a good Dad. Hopefully on your return to The World Federation I will be able to arrange a visit to Pakistan for yourself.