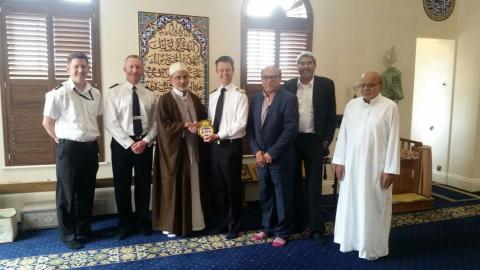 The purpose of this visit was for the Rear Admiral to view the new state-of-the-art eco-friendly purpose built Centre, join in the prayer and familiarize with members of the Wessex Community. 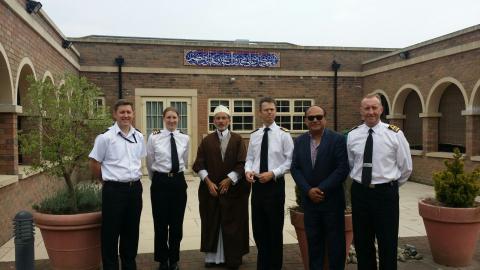 Sheikh Fazle Abbas Datoo, the Imam of Wessex Jamaat said: “This is a unique opportunity for the Naval leadership to visit a mosque especially as Muslims observe the holy month of Ramadhan.  Wessex Jamaat is proud to host this event as it marks an opportunity to bring communities together.”

Herebelow is report of the visit:

On Friday 10th June 2016, RAdm Burton, the Royal Navy’s Rear Admiral Surface Ships and his team had the privilege and honour of visiting the Al Mahdi Centre for Friday prayers.

Driving along a country road in the middle of Hampshire and turning onto a driveway, they were greeted, not by an imposing, iconic building, but by bright green lawns with oriental trees and shrubs, with the single story building of the Al Mahdi Centre.

The text on front of the Service Pamphlet advised the congregation to “Keep Calm & Pray On” - a nice lift and shows that even in this important prayer there was a sense of humour and a touch that was appreciated by the visitors.

There were two sermons held by the Imam / Resident Alim, followed by a chance for the Admiral and his team to observe the Friday Prayers.  Sat at the back of the Congregation Hall watching the rest of the congregation carry out the Friday Prayers there was still a moment for peace and refection.

LStd Ben Goss: “You rarely get such a fantastic opportunity to look around a Mosque - this was a real privilege and we all enjoyed the visit very much.”

Lt Frances Bond: “It was a pleasure to visit the Mosque and particularly nice to be included in the Prayer of Unity.”

Lt Cdr Neil Caswell: “I felt privileged to have the opportunity of sharing Afternoon Prayers, and also being able to accept the warm and fabulous hospitability shown by the Muslim community of the Wessex Shia Ithna Asheri Jamaat.”

RAdm Alex Burton: “ I wish the Muslim community Ramadhan Mubarak and am most grateful for your kind hosting for congregational prayers”

About Al Mahdi Centre:  The Al Mahdi Centre was formally established in 1992 .  The centre caters for the religious, educational, social, spiritual and intellectual enhancement of all its community members.  The Al Mahdi Centre is actively engaged in Interfaith dialogue and local community relief projects.It has a well organised Madrasah (Supplementary Islamic School) for the children of the community.

Do you have the skills to be AFED’s Chief Operating Officer?

AFED is hiring! Do you have the skills to be AFED’s Chief Operating Officer? Click here to find out more.

Get the latest news from the Khoja Heritage December Tour Daily Reflection updates 2018!