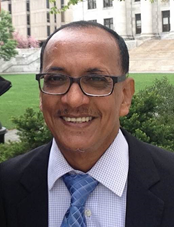 This award is given by the highest research body (NIMR) in Tanzania under the auspices of Ministry of Health Community Welfare, Gender, Elderly and Children and was awarded on 4th October, 2016 at the Julius Nyerere International Conference Centre. 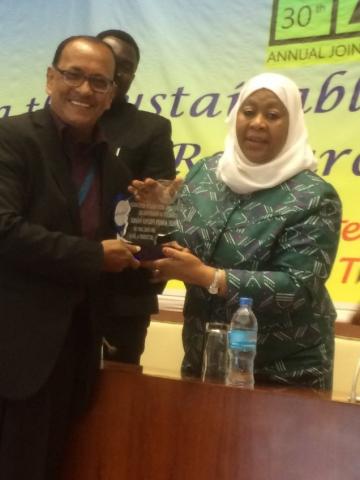 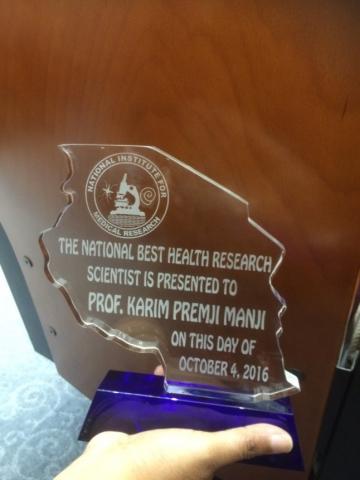 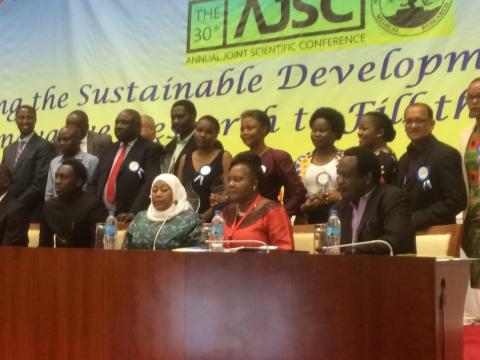 Some of his achievements

1. By training in Neonatal l Medicine in 1994 at the then Royal Postgraduate Medical School, under the mentorship of Prof. David Edwards and Prof. David Harvey and Dr. Dennis Azzopardi.  This training allowed him to supervise several dissertations in Neonatal Medicine (Respiratory Distress, Metabolic Bone Diseases, and Hypothermia, Bleeding disorders, cranial ultrasound in LBW, Congenital Malformations, and Hypoxic Ischaemic Encephalopathy score and so on. Most of these are now in scientific papers published in peer reviewed journals.

2. The neonatal training also allowed him to further the field and he trains local nurses using the perinatal program of essential newborn care on regular basis at the neonatal unit, Muhimbili National Hospital, Dares salaam, Tanzania

3. In 2008, under the sponsorship of Save the Children program, he undertook a survey and Published a book titled “Situation Analysis of Newborn in Tanzania”, and presented in a Forum of key leaders, including the Chief Medical Officer and Principal Secretary of Ministry of Health. This document has now become a reference tool in many Newborn programs in Tanzania

4. He is a Member of the Helping Babies Breath Scientific program geared to reduce Asphyxia related deaths in Tanzania. He trains about 180 semester 5-6 students and about 180 semester 9-10 medical students to undertake Neonatal Resuscitation, annually since 2013

He remains to be a known “neonatologist” and is consulted for various issues related to newborn care in Tanzania.

2. A surveillance of PMTCT along with a senior colleague, in which key bottle-necks identified in the PMTCT program in Tanzania and therefore improvement of PMTCT services

3. Presented and published the Professorial Inaugural Lecture in December 2011 “Myths and Realities of Breast Feeding and HIV in Africa” at the Muhimbili University of Health and Allied Sciences.

2. This Pervasive developmental disorder is not recognized and not given any importance in Tanzania. He is now championing the awareness campaigns in his circle of influence: Academia at the University, Policy makers at the Government levels, Public Awareness and lectures in TV and seminar, and In-service as well as Pre-service training of doctors in the department of Paediatrics.

3. Has undertaken and continues to provide services with the help of colleagues at Brown University, USA (Dr. Ashley –Johnson Harrison) to parents with children with Autism in Tanzania.

1. He is a tutor for the Griffiths Development assessment (UK) and is a member of Action Research in Child development (UK) for the same.

2. Is currently undertaking a multi-site assessment of Neurodevelopment in children who have received B12 supplements in infancy. The Vitabeginning Study, sponsored by the Centre for International Health, Norway.

3. Has established a neurodevelopment resource centre in the University, whereby he can train and provide technical assistance in the following tools: The Griffith, The Bailey, The East African Neuro- development tool and the Malawi Development Assessment tools.

2. Supervises several MSc and PhD students in completing their analysis and publications from the data in these 2 NIH funded trails.

1. Has over 125 publications in peer reviewed journals. Various topics have been covered, ranging from case reports of unusual clinical conditions, breast feeding, micronutrients, development assessments, and Autism. (Citations: 2487, h-index :25, i10 index:  52.  The score is higher than 95% of Research Gate members).

2. Has supervised over 30 dissertations undertaken by Masters of Medicine (Paediatrics) students in various issues related to Child Health.  In the course of being an academic staff member, has trained over 60 Paediatricians in the University, since 1992. Teaching undergraduate students since 1992 in Paediatrics and Child Health.

4. Mentor for Students under the Fogarty Global Infectious Disease Program, through the Harvard-TH Chan School of public health, both at Muhimbili University in Tanzania and as adjunct member of the Global Health department of the Harvard TH Chan school of Public Health, USA.

5. Member of the DSMB for Malaria Vaccine trials, and for TB/HIV trials in Tanzania.

6. Member of Scientific committee of the Clinical Trials, TFDA and the Ifakara Health Institute.

The North American Shia Ithna'ashari Community Organization also known as NASIMCO is delighted to be amongst the few umbrella organizations who have understood the importance of the community's core - the women. This Mahe Ramadhan, NASIMCO provided the platform to women such as Zakira Shyrose Dhalla, Zakira Mahjabeen Dhala and Sister Berak Hussain who conducted and led the Live Events on a weekly basis. Find out more here.

Our former Vice President, Manzoorali Kanani, has been awarded The Order of Green Crescent of Comoros by the outgoing President of The Union of Comoros, Dr Ikililou Dhonine.