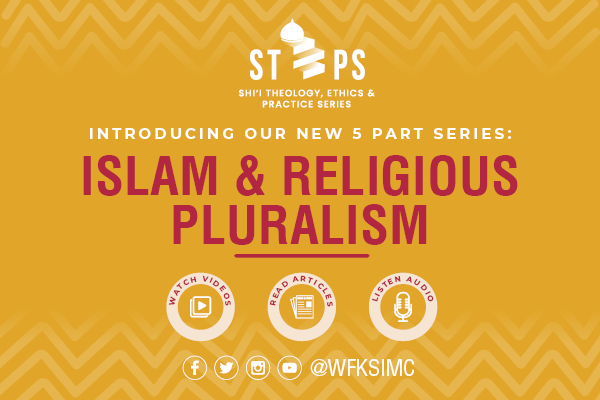 The Islamic Education team is pleased to announce the continuation in our STEPS series with our latest and most comprehensive subject ever tackled: Islam and Religious Pluralism.

This series takes a look at the highly contested and controversial belief being expounded by some people that there are multiple “straight paths” which all lead to God. This theory proposes that whether one is a Jew, Christian, Muslim, Hindu or anything else, that all roads lead to the One True God and so all of humanity is “granted” salvation regardless of the path they choose in life. This belief is further developed by its proponents – both within the Shia community and also from other faiths – to encompass the various sects within the same religion as also being equally true and salvific – allowing ALL its adherents to make it to Paradise – Catholic and Protestant; Shia and Sunni; and all other groups.

Is this topic as “simple” as heaven or hell and right or wrong – or is there more to it? What are the nuances of this discussion? How should a believer understand the Qur’anic verses which speak about “Jews, Christians, Zoroastrians, and Sabians and anyone who believes in God and does good deeds ” to have “no fear, nor grief”? Are they all equally valid paths to follow even today in 2020 with the coming of the last Prophet of God Muhammad with the final message for mankind, the Holy Qur’an?

We will be releasing five videos featuring male and female scholars from our community who will elaborate on these important topics by answering the hard questions. Watch them here.

With the many queries Scholars receive on the position of Islam and Religious Pluralism, we have taken five of the most relevant and intense ones and asked our community scholars to speak about them.

In addition to the STEPS Series, we have translated the book "Pluralism and Its Various Spheres" and provided it as an eBook and Audio book. Further details below.

eBook: Pluralism and Its Various Spheres

In an era in which political correctness and sensitivities of others is front and centre, one of the universally discussed topics within people of faith traditions is that of Religious Pluralism. To aid in our understanding of this topic and the view of Islam, this work, "Pluralism and Its Various Spheres”, the author, Ayatullah Misbah Yazdi brings numerous verses of the Qur’an and intellectual arguments to draw the reader’s attention to the notion of “multiple straight paths” and how humanity can live in harmony with one another without giving up their religious heritage.

This work is available in TEXT and PDF format as well as an Audio Book and video on YouTube or on any Podcast channel. 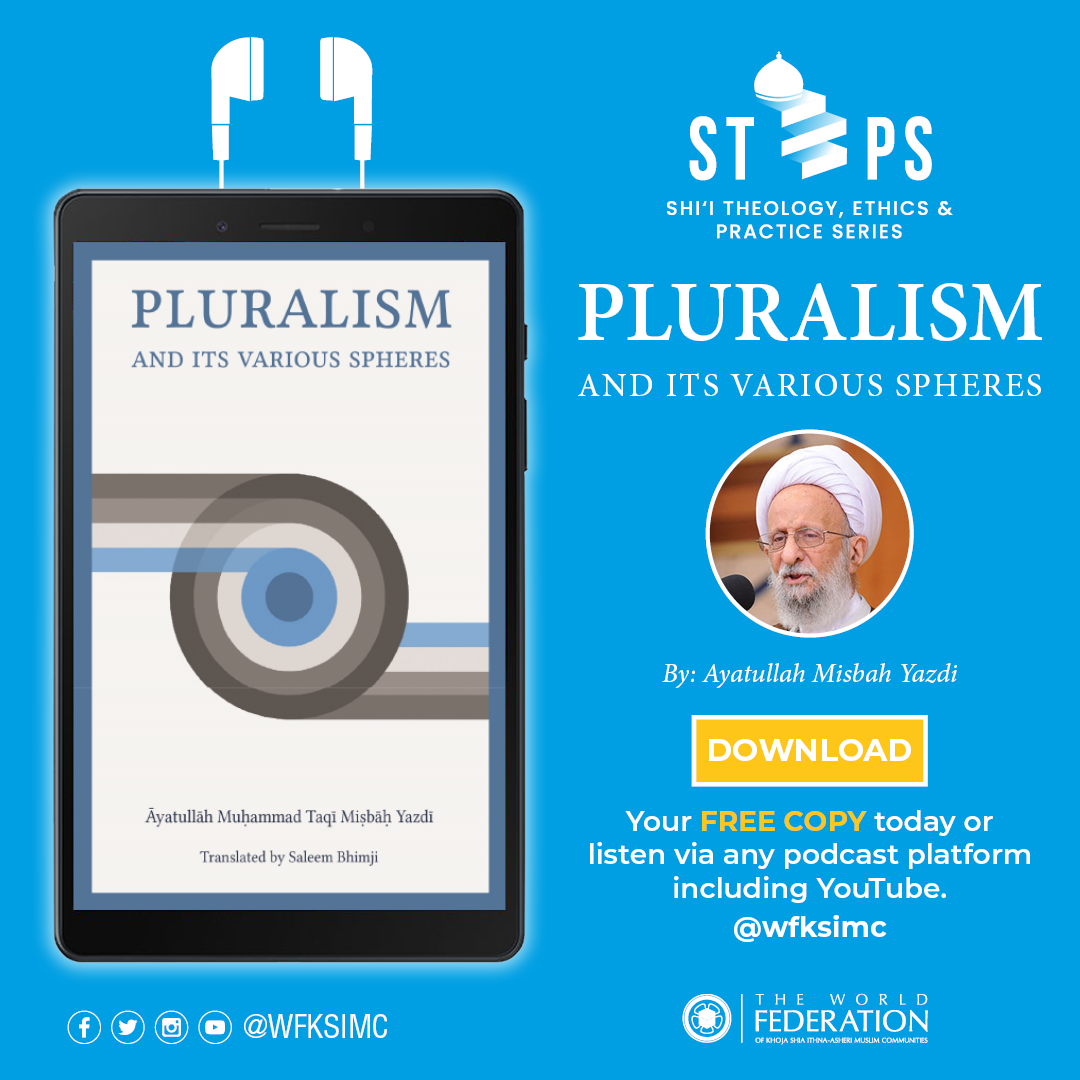 Want to learn more? We've compiled a four-part article which delves into each topic deeper.

In Part One of this stimulating and thought-provoking topic which is sure to open up discussions around the dinner table and in our Majaalis and Madaaris, we will begin by investigating what the universal Qur’anic vision is concerning the “straight path”. By introducing the topic, its definition and then reviewing various verses, we will present the unique multi-pronged approach of the Qur’an to pluralism – rejecting the contemporary notion which has been propagated by Muslim and non-Muslim theologians.

In Part Two, we will then tackle the topic of the unbroken chain of God’s emissaries. With 124,000 prophets being sent, how are we to understand the topic of pluralism with potentially tens or hundreds of “teachings” given by God over the history of humanity   - are they all equally valid? We will also focus in on the aspects of pluralism which have been laid down by the likes of Imam Ali ibn Abi Talib, peace be upon him, and Imam Ali ibn al-Husayn – al-Sajjad, peace be upon him in their writings and practical conduct.

In Part Three, we debate the topic of is there “equality” of all religions? What makes a person a “true Muslim” – one who has faithfully and fully submitted to God? Do the “Abrahamic Religions” of Judaism and Christianity have any basis to stand on? Did Moses and Jesus preach a religion based on their name, nationality or background or were they Prophets of God preaching pure submission to One True God?

In Part Four and concluding part of this series, we will review the topic of what is the final and perfect method of submission (Islam). With the line of prophets which God sent throughout history, we realize that it is not possible nor is it practical to follow multiple prophets in one-time frame – so what is humanity to do? We delve into the often misunderstood verse of the Qur’an which seems to say that God “wants” there to be various religions and that He “enjoys” seeing our diversity in worship. We conclude with the practical actions of Prophet Muḥammad (PBUH) and review the actual text of letters which he sent to leaders around the world inviting them to leave their outdated and abrogated teachings and to accept him as the final Prophet, the Qur’an as the final Book, and al-Islam as the final, perfect method of Submission to God.

This STEPS topic will be released in multiple formats: ALL AVAILABLE ON OUR DEDICATED STEPS PAGE.

As a bonus, all articles will also be made available in ONE complete PDF BOOK which contains a BONUS CHAPTER on Pluralism as it Relates to Christianity and Hinduism. With Hindu teachings apparently rooted in monotheism but in practice being polytheistic, some Muslims argue that the Trinity in Christianity is similar to the practices of Hindus. If so, in light of Religious Pluralism and the status of the People of the Book, are we to understand Christianity and Hinduism differently or are they two sides of the same coin?

The Curriculum Development Team of the Madrasah Centre of Excellence (MCE) is progressing well with preparing lessons for its Tarbiyah curriculum. The lessons, which are being developed by a team of experienced madrasah teachers and a graphic artist, undergo a rigorous process of vetting.

Read about our external tableegh work in Kosovo, Bosnia and Kenya.

This is the second book in a series that will cover 180 questions and answers about a vast range of issues covering belief, practices, history and current issues that affect Islam. A must-have for any home!