141 people were killed, of which 132 were children (ages 12 to 16) and 9 teachers. Over 100 people were wounded and are being treated in hospitals. Most of the younger students escaped the raid as the aggressors were instructed to target the senior students. All seven Taliban attackers were killed in the operation.

The school is mostly attended by children of army personnel. Pakistani authorities said that the Pakistan Taliban claimed responsibility for the attack in retaliation for an ongoing Pakistan Army operation against the Taliban and its allies in the region.

A 16 year old survivor was shot in both legs and played dead under a desk to stay alive. He saw 2 of his friends being shot, one in the head and one in the chest. He said:  "The man with big boots kept on looking for students and pumping bullets into their bodies. I lay as still as I could and closed my eyes."

Another student, Mohammad Baqir lost his mother, a teacher, in the attack.

On Tuesday night, funerals were under way in Peshawar where the victims were carried out of the hospitals directly in their coffins.

This latest and deadly attack has triggered shock and outrage across the world.

The World Federation is deeply saddened and outraged by this cowardly and inhumane attack against innocent lives. There is no justification for such heinous crimes. The World Federation promotes peace, kindness and unity across the globe where we as human beings should love for others what we love for ourselves, and dislike for others what we dislike for ourselves. 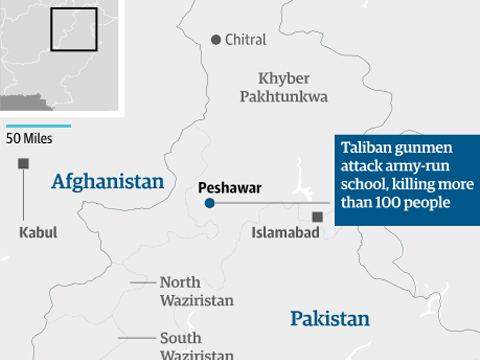