The Arbaeen is an important time as it represents another opportunity to renew the pledge of allegiance to the Ahl al-Bayt (a) through: Ensuring the flame of love of Imam Ḥusayn (a) endures in our hearts; memorializing the day of ʿĀshūrāʾ; and ensuring that the reason for the movement – protecting ourselves from deviation – is never lost in the jostle of daily life.

A Passion Which Will Never Subside 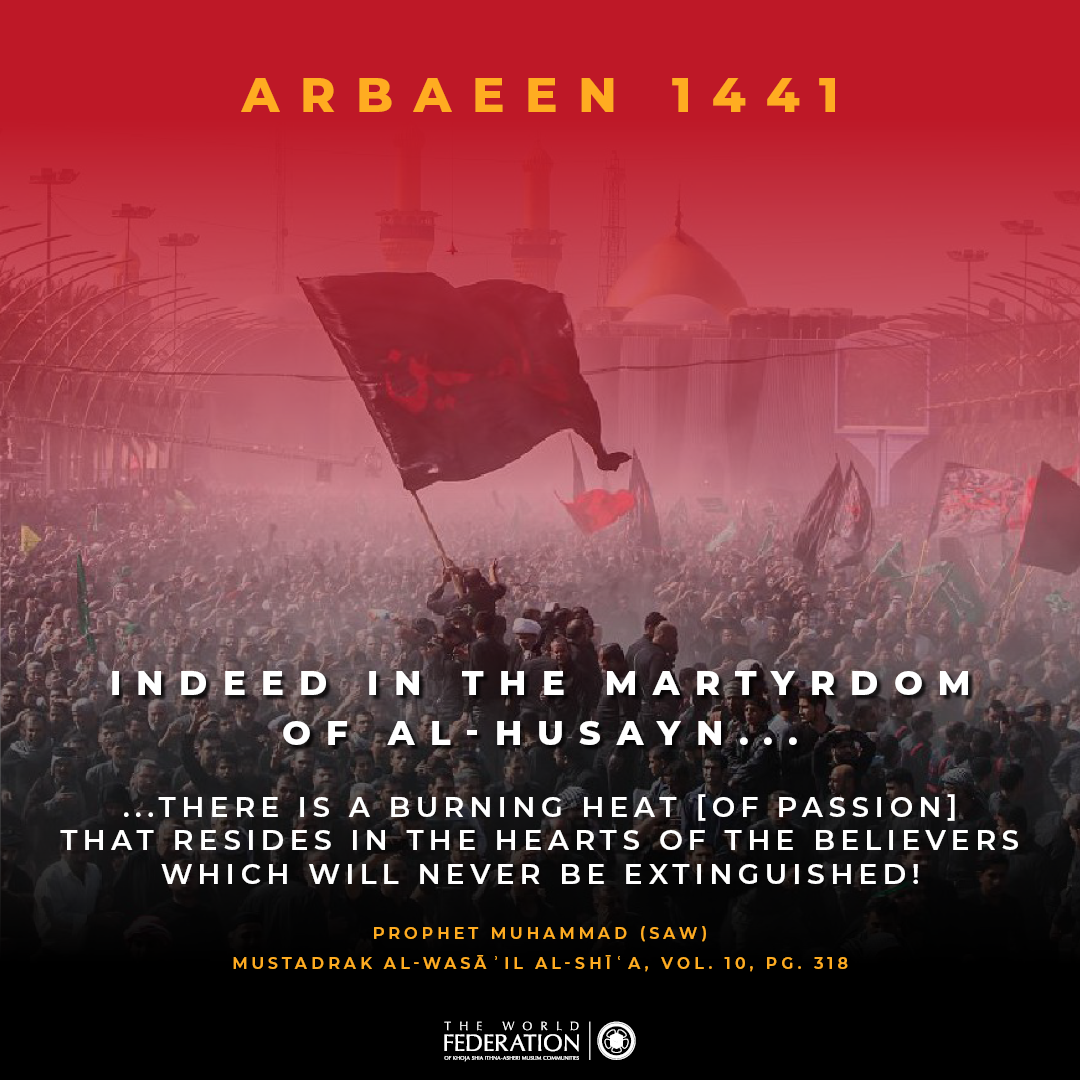 One day, Prophet Muḥammad, prayers of Allah be upon him and his family, was looking at his grandson Ḥusayn the son of ʿAlī, peace be upon them both, he had the young child sit in his lap and then said to him:

Indeed in the martyrdom of al-Ḥusayn there is a burning heat [of passion] that resides in the hearts of the believers which will never be extinguished. [1]

Grieving and lamenting over the death of a loved one is a natural human reaction and one which is expected of the believers – in essence, it is “the right” of the deceased that we mourn over their loss.

The loss of Imam Ḥusayn, peace be upon him, however, is at an entirely different level. His martyrdom is one which, as the tradition tells us, ignites such a passion and flame in the heart of the true believer that it remains with them forever.

In this regards, we see that not only do his lovers remember him and long to visit his sacred shrine, but the creations of Allah - such as the jinn, pigeons and the previous prophets endlessly ask Allah for permission to go to Kerbalāʾ to perform the ziyārat of Imam Ḥusayn, peace be upon him. In this regard, there is a constant flow of prophets descending from the heavens to perform his ziyārat while another assembly ascend back into the heavens – as narrated in Kāmil al-Ziyārāt, chapter 38.

Not only the prophets and messengers, but the angels are also desirous to visit the grave of Abā ʿAbdillāḥ al-Ḥusayn, peace be upon him, and as one tradition states that there are four thousand angels covered with dust who visit and cry over Ḥusayn, peace be upon him, and continue to do so until the Day of Judgement. They receive everyone who performs the ziyārat and what that visitor becomes ill, the angels visit them and when they die, the angels attend their funeral. [2]

The commemoration of the day of Arbaeen reminds us of the never-ending passion and love for Imam Ḥusayn, peace be upon him, and that just as the Messenger of Allah, prayers of Allah be upon him and his family, we too continue to have the burning affection in our heart for the Master of the Martyrs, peace be upon him. 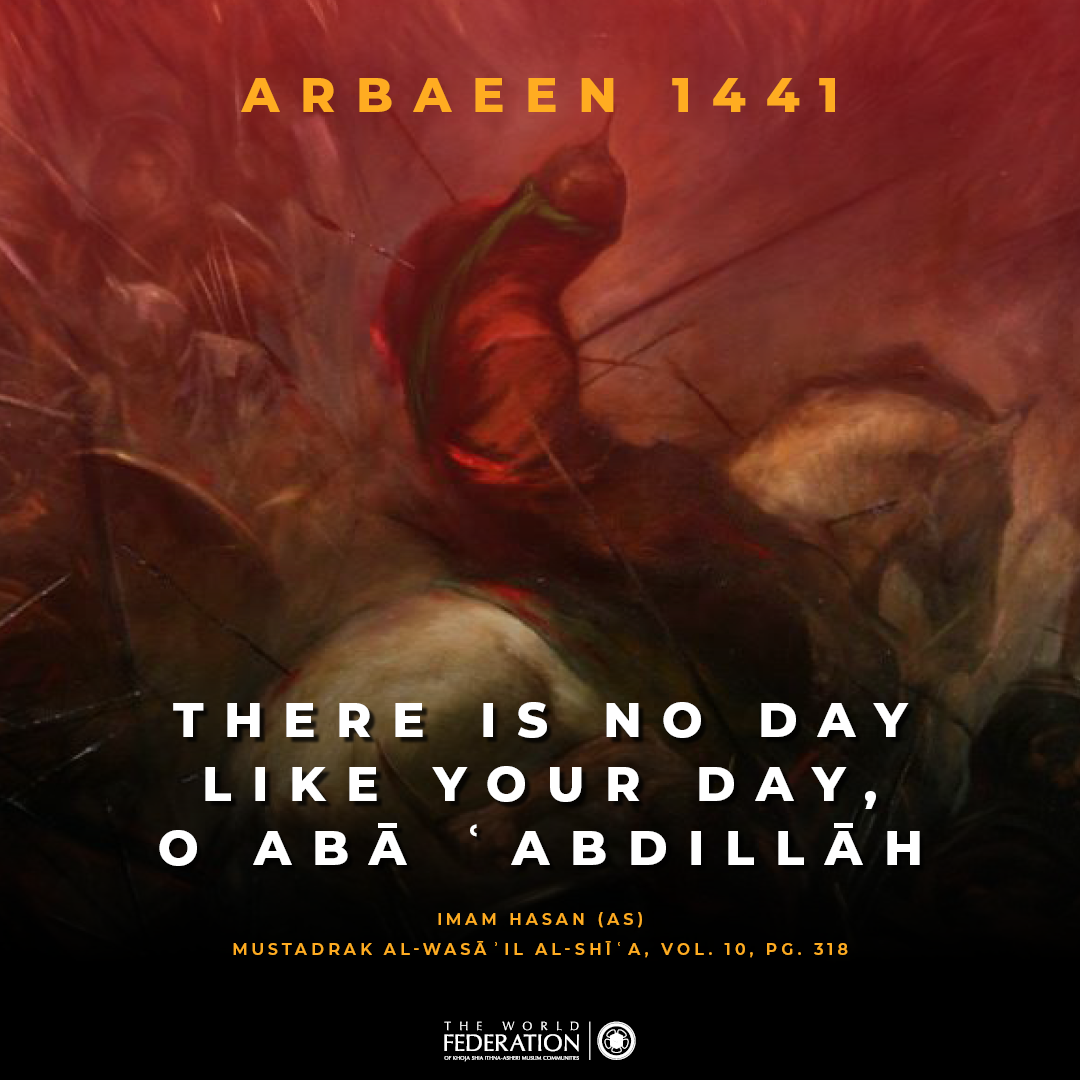 There is no day like the day of ʿĀshūrāʾ - also known as the Day of Abā ʿAbdillāh.

In a very private moment between two brothers, Imams Ḥasan and Ḥusayn, the following discussion ensued while the former was on his death bed:

Imam Hasan, peace be upon him, asked his younger brother: “Why are you crying, O Aba Abdillah?” He [Imam Ḥusayn, peace be upon him] replied: “I am crying because of what has been done to you [your poisoning and the state you are in].” To this, Imam Ḥasan @ replied, “Whatever affliction has affected me is the poison given to me and I will be killed due to it. But there is no day like yours, O Abā ʿAbdillāh! On that day, 30,000 men claiming to be from the nation of our grandfather Muḥammad, prayers of Allah be upon him and his family, and considering themselves to be adherents to Islam will surround you to kill you, spill your blood, destroy your dignity, make your children and family members as captives and plunder your property…" [3]

Grief and tragedy have been a part and parcel of human existence on Earth, starting with the murder of Qābil (Abel) by his brother Qābil (Cain). This pattern of innocent people being killed has, sadly, continued throughout the ages. The guides whom Allah has deputed have been killed and the saints (awliyāʾ) have lost their lives in tragic ways. However, in the words of the Ahl al-Bayt, peace be upon them, none of this compares to the martyrdom of Abā ʿAbdillāh al-Ḥusayn, peace be upon him - even the millions killed in man-made wars cannot compare to the day of ʿĀshūrāʾ.

Despite suffering tremendously due to the poison which his wife, Jodah, had administered to him by the direction of Muʿāwiyah ibn Abī Sufyān, Imam Ḥasan, peace be upon him, mustered up enough strength to condole his younger brother, Imam Ḥusayn, peace be upon him, that his tragedy was much greater!

Using the day of Arbaeen to reflect on the tragedy of Kerbalāʾ, we see that the 30,000 soldiers who had gathered to shed the blood of the grandson of Prophet Muḥammad, prayers of Allah be upon him and his family, did so not as “non-believers” – rather, they did so while at the same time claiming to be Muslims! In the army of ʿUmar ibn Saʿd, there were people who performed their ṣalāt, read the Quran, engaged in the night prayer (ṣalāt al-layl) and many other acts of spirituality. However all of this was in vain as they enacted the greatest crime on humanity by shedding the blood of the last remaining member of the Ahl al-Kisāʾ and killing all of his family members and the small contingent of supporters who were with him. All of this was done “in the name of Islam”.

Thus, the day of Arbaʿīn becomes a day to reflect on the supreme sacrifice offered by the Master of the Youth of Paradise, Ḥusayn ibn ʿAlī, peace be upon them both, and to count this as the saddest day in the annals of history. It is also a day to make a pledge to the Imam of our time that we will not let him down and that we will stand by his side to enact the justice which he will work to install in society. 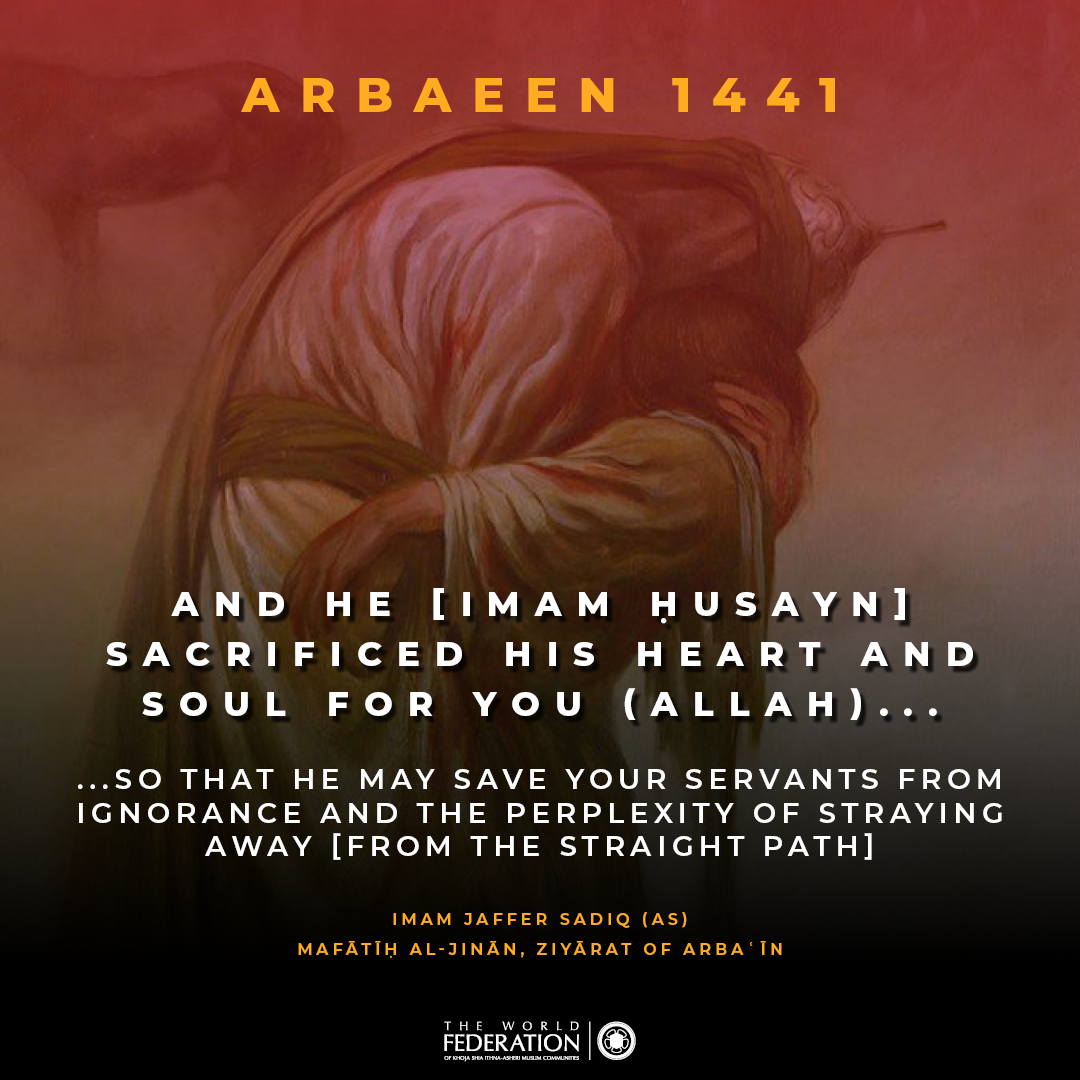 In the ziyārat of Arbaʿīn, there is a poignant line which states:

Life is fraught with challenges at multiple levels, and on this journey, Allah has placed signs and guides to make the movement easier. Just as when we drive in our car from one destination to another, there are signs to assist us, so too in religion, we have a similar concept.

For the Muslim community, there are fourteen powerful guides, illuminating the path towards God - namely Prophet Muḥammad, prayers of Allah be upon him and his family, and the Ahl al-Bayt, peace be upon them.

These guides not only function during their life time when the believers could go to them and direct seek support, but especially in the case of the Master of the Martyrs, Imam Ḥusayn ibn ʿAlī, peace be upon them, his martyrdom and everything associated to the tragic events of ʿĀshūrāʾ provide guidance to all of humanity for generations to come.

In the ziyārat, Imam al-Ṣādiq, peace be upon him, reinforces that the goals of the movement of his grandfather, Sayyid al-Shuhadāʾ in sacrificing himself was solely for the sake of Allah and it was to save the servants of Allah - and in reality all of those who will hear of his name and movement and be inspired by him – from the path of ignorance – especially levels of ignorance which are imposed on humanity by godless forces of secularism and consumerism which get people to focus on the here and now and the material “needs”, all the while, forgetting their spiritual requirements and from deviating from His straight path.

The movement of Kerbalāʾ was never about power and governance for the sake of authority. Rather, it had similar goals to what Prophet Muḥammad, prayers of Allah be upon him and his family, had brought to humanity which was to free them from the shackles of their own preconceived notions and regressive habits. It was about bringing humanity into the light of the Divine teachings and ensuring that people lived a life of freedom IN God – not freedom FROM God.

In giving his life and that of his family and friends on the day of ʿĀshurāʾ, Abā ʿAbdillāh al-Ḥusayn, peace be upon him, shows humanity for once and for all that his movement was bigger than just one person – it was for the sake of God.

The World Federation is pleased to launch this fantastic opportunity for female Khoja students who will be commencing their university studies in September 2016.