Day Two Feasting at the Banquet of Allah

The first 5 videos are an introduction to the Holy Month of Ramadan.

Feasting at the Banquet of Allah (SWT) 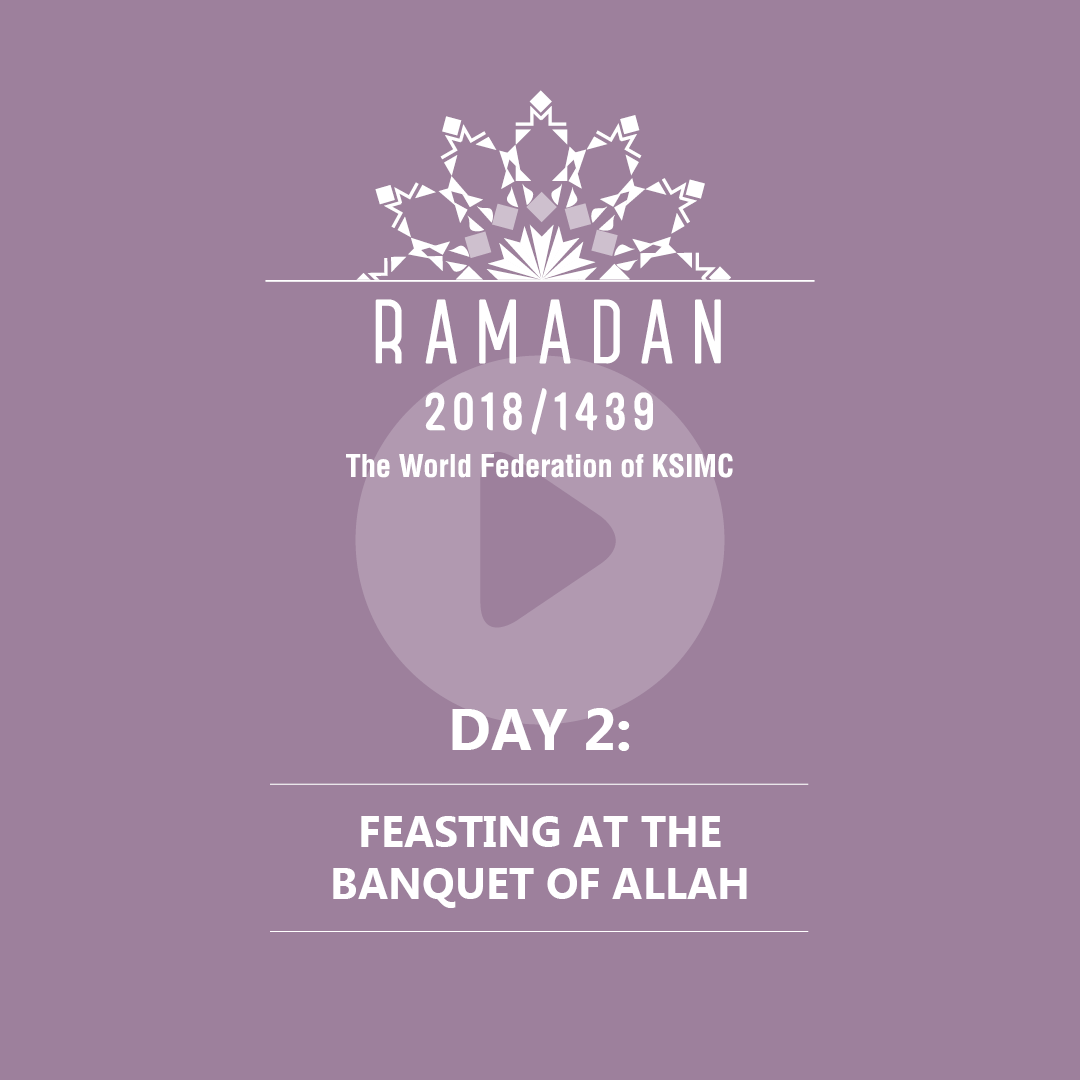 O you who have faith!

so that you may be God-wary

Taqwa means to protect oneself from sinning. Most sins take root from anger or lust and fasting impedes the heat of these two and therefore causes the reduction of corruption and increase of God-wariness.

According to the commentators and Quranic Sciences scholars, verses that begin with "O you who have faith", have been revealed in Medina. The command to fast – like the command to jihad and payment of zakat – has been issued in the second year of hijra.

The effects and blessings of fasting:

God-wariness and God's worship both apparently and internally, are the most important effects of fasting. Fasting is a unique hidden worship. Prayers, hajj, jihad, zakat and khums are acts that people witness, but fasting is not viewable. Fasting strengthens man's will; someone who can keep himself away from food, drink and his own spouse can control himself in relation to the wealth and family of others. It also strengthens one's affections, one who has tasted the difficulty of hunger for a month, becomes familiar with pain and feels the pain and hunger of others. The Holy Prophet (s) has narrated that fasting is half of patience.

The Prophet (s) narrates that whoever fasts in the Ramaḍan for Allah, all his sins will be forgiven. In another hadith it is narrated from him that everything has a zakat and the zakat of the bodies is fasting.

The importance of fasting is so high that the reward of many acts of worship has been considered equal to that of fasting.

The word صیام and صوم mean to stay away from an act, for example, to stay away from eating, drinking, intercourse, speaking etc. and perhaps its meaning includes the condition of abstaining from acts that the heart desires and wishes to perform. The person who mentions this view says that in terms of lexicological meaning these words referred to such acts but later in religious law, it was used in a particular meaning which is to stay away from dawn to Maghreb with intention of being for the sake of Allah.

In this verse, Allah has mentioned the philosophy behind fasting and that is: so that you may be God-wary. Fasting is an effective reason for nurturing the soul, piety, and God-wariness in all areas and aspects.

Since this act of worship comes along with abstaining from material pleasures and with difficulties, especially during the summer months, different expressions have been used in this verse in order to prepare man's soul for the acceptance of this command.

The first is the address: O you who have faith! And then it has been mentioned that fasting is not only particular to you but was present for the previous nations as well. Finally, by mentioning the philosophy of fasting and the fact that the plentiful effects return to you a hundred percent, it becomes a likable and pleasant issue.

In a narration from Imam al-Sadeq (as), it has been mentioned that the pleasure of the address: O you who have faith, is such that it has taken away the difficulty and hardship of this worship.

The benefits of fasting come back to man himself and the benefit of having taqwa is something that no has a doubt about because every person understands through his innate nature that if he wants to be connected to the world of purity and elevation and reach perfection the first thing that is required is that he abstain from licentiousness and from being busy with physical and lustful pleasures without any conditions or limits and to consider himself greater than to consider the material life as his goal and in short, to stay away from anything that takes him away from Allah.

This taqwa is only possible to attain through fasting and staying away from one's desires; the closest, most effective and most general spiritual diet that all can benefit from is to stay away from desires which is something that all people of all times are afflicted with i.e. desire of the stomach in eating and drinking and carnal desire. If one stays away from these three for a time and continues practicing this, the power of abstaining from sins will gradually be strengthened in them and they will also gradually gain control over their will; therefore, they will not give in, in the face of any sin and will not be weak in gaining closeness to Allah because it is clear that one who abstains from eating, drinking and intercourse with one's spouse which are lawful things, because Allah asked him to do so, he will definitely answer the call to stay away from sins and disobedience.

In a Hadith al Qudsi, Allah has said: fasting is only for me and I am its reward (or I will give its reward)

This narration has been narrated with little difference from both Shi'a and Sunni sources and the reason why fasting has been mentioned as being for Allah is that it is the only worship that is formed of the absence of things in contrast to other worship like prayers, hajj etc. which are formed of existential matters or at least existential issues are part of them and it is evident that an existential act cannot be totally pure and sincere in showing the servitude of a servant and Lordship of Allah as it will not be free from the imperfections of physical matter, from limitedness and from egotism and it is possible that it may also be performed for other than Allah or a part of it is performed for someone other than Him as is seen in acts that are performed with riya (dissimulation), in contrast to an act that is all negation i.e. fasting, which is not eating, not drinking and not performing other acts in which the doer of those acts sees himself to be free from the limits of matter and through piety and restraint keeps himself pure from the desires of the soul and these non-existential things are not something that any other apart from Allah can be a part of as it is a matter only between a servant and his Lord and no one but He knows about it.

Depending on how the word اجزی  is read in Arabic, whether as an active or passive verb, the narration can mean either that in giving the reward of fasting there is no mediator or distance between Allah and the servant as there is no interference of anyone else in the servant's worship through fasting (if the verb is read as active) or it can mean that Allah Himself is the reward and in that case the narration is an allusion to the closeness of the fasting person to Allah (if the verb is read as passive).

This article describes the importance of the holy month on Sha'ban. Read more to get the most out of this month.

The World Federation’s India Office and Mumbai Jamaat jointly organised a workshop for the pre-marriage age youth of the community in Mumbai. This workshop was a part of 4 workshops organised to cover all age groups from teens to the elders.

Providing service to the community on Family Ethics is not just the objective of The World Federation India Office but also the Khoja Shia Ithna-Asheri Jamaat Mumbai. Keeping this in mind, both the organisations join hands in presenting 4 Workshops on Family Ethics.