An exceptional historical Documentary – “The Journey of Faith” Allentown – USA. May 14, 2016

An exceptional historical Documentary – “The Journey of Faith”
Allentown – USA. May 14, 2016 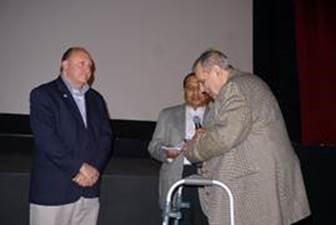 The “Journey of Faith” - a unique and first-ever documentary film exploring the 650 years’ history of the evolution of a minuscule community - KHOJAS, numbering today less than 150,000 men, women and children put together, spread out in 40 odd countries, as nationals of around 20 different States is encapsulated in a documentary screened at 500-seat Civic Theatre on May,14,2016 in Allentown, PA.

The “Journey of faith” was produce as a result of labor of love by the Mullah Asgher Memorial Library and Resource Center (MARC) in association with The World Federation of KSIMC. This monumental documentary has opened the windows to our past through the lens of talented Producer and Director Dr. Hasnain Walji.  It was an honor for me host Dr. Walji for the premiere of the documentary on the East Coast of USA. I was truly thrilled.

The venue at Civic Theater was perfect and added to the atmosphere by the presence of the Mayor of Allentown, Ed Pawlowski and County Sheriff Joe Hanna and widely covered in the local newspapers.

Below are the links:

Through Political turmoil Khojas forced journey throughout the world

Over 340 people were registered to attend from the tristate area of New Jersey, New York and Pennsylvania. This film serves as an exceptional historical document about the history of the Khojas. It was also very captivating and truly inspiring. What a brilliant and tastefully done documentary.

The first half of the film illuminates the audience to our origins in India and then to Africa, giving in-depth understanding of the developments that took place some 650 years ago. The sight of bullock carts in which our ancestors often travelled around one hundred years ago and how they toiled to till their lands, the type of sailing crafts and the hardships of sailors and passengers as they sailed out from western shores of India to settle in East Africa and Madagascar was a rude awakening in understanding their historic realities. The long journey by sea where the supply of fresh water would often be restricted to one cup a day per person come as a shock and disbelief to many viewers. The documentary also explains how severe restrictions were placed between Ismaili Khojas and Shia Khojas and explores the identity crisis faced by many Khojas throughout history as they dealt with opposition to establish their Shia identity, whilst struggling with the loss of a homeland from having migrated from India to the shores of Africa.

Dr. Hasnain Walji, shown in the film, visited many historic sites, engaged in passionate discussion with historians and interviewed eyewitnesses. Throughout the series, Dr. Walji highlights trials, tribulations and triumphs of the diaspora from India to the shores of Africa and beyond.

After two hours of thought-provoking and remarkable “Journey of Faith”, Dr. Walji concluded with final remarks acknowledging Br. Murtaza Ali Khaku, his brother Salim Khaku and sister-in-law, who were the part of the Somalia evacuation team.

Dr. Walji also presented “the Star of Service” award from the Mulla Asgher Memorial Library and Resource Centre to Al Hajj Mustafa Bhai G. R. Jaffer who was very instrumental in evacuating the community members and especially women from the turmoil after the Zanzibar revolution.

After the movie, a few families gathered at the new restaurant Zanzibar Kababs and Grill (opened on May 11, 2016) for dinner and after evening prayers, there was a brief Baraza with Dr. Hasnain Walji at a local Dunkin' Donuts. Dr. Walji gracefully answered questions. People got a better sense of our Khoja identity and felt a profound connection with our forefathers whose legacy, was not just adopting the school of Ahlul Bait but also, community services (Khidmat-e-Qaum) and philanthropy.

This documentary was meant to inspire and reinforce our youths to stand up and serve our community. We have a culture, multiple ethnic languages and wonderful heritage. Our youths should be proud to be part of this community and every household should have a DVD of the Khojas - A Journey of Faith. Contact Mohammed Khaku at [email protected]rcn.com for copy of DVD. A DVD of this documentary includes some additional materials like the historic Somali Seaborne evacuation in 1991 are worth acquiring by every family to share with their progeny.

Lastly, I sincerely thank all the volunteers and donors for their help. Many thanks to the audience for attending and Dr. Walji for his efforts in preserving our history for generations to come.  THANK YOU!

Next Week: Discussion and few Quotes about the documentary from the Audience

December’s Khoja Studies conference certainly made clear that there is a rich history of Khoja heritage that often goes unnoticed.

Introducing the Tarbiyah Storytime App! This app allows children from all over the world to have access to our unique MCE Tarbiyah books at the touch of their fingertips. Find out more about this one-of-a-kind app here!

Wiladat Mubarak from The World Federation!

On this auspicious occasion of the birth of Imam Ali (as), let us follow the footsteps of our Mawla, The Father of the Orphans and Those in Need, to help make a difference this Shahr Ramadan.