Faith and Culture are not mutually exclusive - An Analysis of Our Evolution as an Iconic Diaspora. 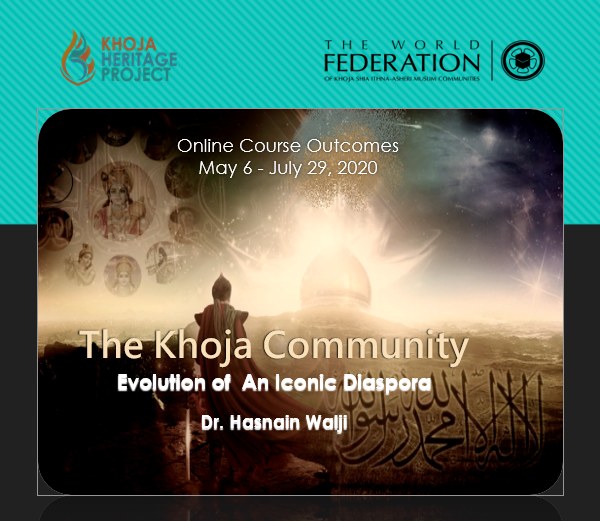 Faith and Culture are not mutually exclusive - An Analysis of Our Evolution as an Iconic Diaspora.

"The Khoja Community - an Iconic Diaspora" is the second online course by the Khoja Heritage Project of The World Federation. Presented in three parts, over 12 weekly
​interactive ​multimedia sessions, this online course delved into the epochal phases of the evolution and development of the Khoja Community. The periods under study were ​Pre-​colonial India, during Colonial Rule and finally tracing the migratory patterns that resulted in the Khoja diaspora today. Of the 146 people, form across the globe who registered, over a hundred attended with an average of 49 participants joining each week for a one hour session ending with spirited question and answer sessions.

The key learning was:  that faith and culture of the Khojas, far for being mutually exclusive, are in fact complementary.  By pouring the essence of its  faith in the container of culture helped make the Khoja Community what it is today.

Having provided a background of the societal structure, traditions and rituals as well as ancient myths amongst the Sindi, Kutchi and Kathiawadi communities in what is known as present Gujarat in India and Sindh in Pakistan, the Host Presenter Dr. Hasnain Walji, covered the genesis of the Khojas in pre-colonial India dating back some 700 years. Most participants found it intriguing that their Khoja ancestors originated from Lohargadh near the Khyber Pass (present day border between Pakistan and Afghanistan).

The second part focussed on Identity building during the British Colonial rule in India and a review by Shaykh Kumail Rajani of the major court cases which resulted in the  and the crystallization of the three Khoja Communities after the arrival of the Aga Khan I in India in 1845.  The sessions also provided  revealing analysis through 28-year tenure  of Mulla Qadir Husein after his arrival in 1928, providing a rare glimpse into the the trials and tribulations of a muballigh as the Khoja Community slowly embraced  the values enshrined in the Shia Ithnaasheri faith.

Guest pr​e​senter Prof Iqbal Akhtar covered the nuances of Khojki as a script rather than a language and Iqbal Dewji the founder of KhojaWiki spoke about the entrepreneurial spirit of the Khojas who braved the oceans in search for better pastures.


An engaged participant wrote: "This course gave me an in depth look at the history of our ancestors of how they must have suffered persecution when they converted from Hinduism to Satpanth and eventually branched into Khoja Sunni, Khoja Ismaili and  Khoja Ithna-Asheris; how they took the dangerous and arduous dhow trip across the Indian Ocean and how finally they settled down in the unknown lands with dangerous diseases, wild animals and other challenging circumstances in East Africa."

The third segment provided a compelling analysis of the impact of  migration, as well as community building and socio-religious endeavours. This is an interesting  case study where the Khoja Community has been most impactful through its organizational structures.  It also reviewed religious and history literature through the lives of literary figures such as Adelji Dhanji Kaba, Haji Naji. Mulla Mohamed Jaffer Sheriff Dewji provided an insightful example of scholarly respect and decorum  even when these scholars had fundamental disagreements.

A quote from another participant aptly sums up the rationale for the Khoja Heritage Project: " Its admirable that our ancestors preserved our culture and language for about a century in a new land. Unfortunately, for those of us that have moved to the west we haven't been able to do the same in <50 years. We need to consciously make an effort to do this for our preservation."

In addition to such courses, through its many projects ranging for digitizing of Khoja history texts, Heritage Tours, documentary films, symposia, academic conferences. Khojapedia  as well as capturing oral histories,  the WF KHP continues its endeavors to promote Khoja Heritage and History.

The North American Shia Ithna'ashari Community Organization also known as NASIMCO is delighted to be amongst the few umbrella organizations who have understood the importance of the community's core - the women. This Mahe Ramadhan, NASIMCO provided the platform to women such as Zakira Shyrose Dhalla, Zakira Mahjabeen Dhala and Sister Berak Hussain who conducted and led the Live Events on a weekly basis. Find out more here.

All the way from Sydney comes a story that is as small as it is humungous. Sister Mubina Damji from our community has built a good relationship with the local police force. A couple of weeks ago, she reached out to her liaison person in the Police Force asking if there was anything she and her friends could do to assist. Find out how they helped here.