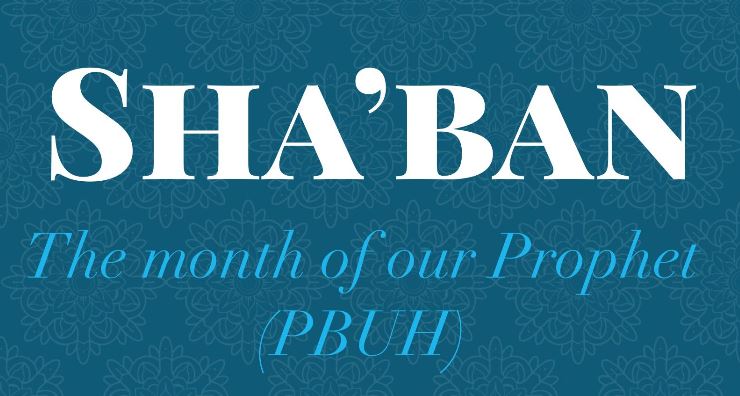 Sha’baan: The Month of the Messenger of Allah (s)

The blessed month of Sha’baan has now commenced – a month which is described in the daily-recited salawat of Sha’baaniyyah as a period which is encompassed with the mercy and pleasure of Allah.

The scholars of Islamic spirituality rightfully state that this month is important for those seeking spiritual growth. With Sha’baan being placed in the middle of two other special months, namely Rajab and Ramadhan, it has an added significance as four most important personalities in Islam were born within it. On the 3rd of the month we remember the glorious birth anniversary of Aba Abdillah al-Husayn ibn Ali (a), and in the middle of the month we celebrate the birth of the saviour of humanity and the one who will avenge the tragedy of Kerbala, Imam al-Hujjat (a) – our 12th and living Imam. Of course we cannot forget the birth of Abul Fadhl al-Abbas (a) on the 4th and the birth of our 4th Imam, Ali ibn al-Husayn Zaynul Abideen (a) on the 5th of the month who played key supportive roles in and after Kerbala!

The traditions tell us that after Laylatul Qadr in the month of Ramadhan, the 15th of Sha’baan is the next best night in the sight of Allah. Indeed the qadr (great honour) and the taqdeer (the blissful fate) of humanity is intricately tied to this night and with firm belief in and active preparation for the advent of the Awaited Saviour, may Allah hasten his return, humanity on a whole and the believers in specific will be able to live in an era of comprehensive justice on earth – if we are ready to follow the example which began with Imam Husayn (a) on the Day of Ashura.

Recommended Acts of Worship in Sha’baan

The Noble Prophet (s) has declared that:

Sha’baan is my month – may the special mercy of Allah be upon the one who assists me in my month.

The seekers of spiritual greatness and human perfection must heed to this Prophetic call and strive to be included in his beautiful prayer – which without a doubt will be accepted and fulfilled by Allah.

In addition, we also need to attempt to emulate the loving obedience of the Noble Prophet as exemplified by the Commander of the Faithful Ali (a) when, in regards to the passage of the Quran in Surah Ale Imran (3), verse 31 which reads:

Say , ‘If you love Allah, then follow me; Allah will love you and forgive you your sins, and Allah is all-forgiving, all-merciful.’

Imam Ali (a) has been quoted as saying:

In this blessed month of Sha’baan, we can help to build a spiritually vibrant community through the performance of several recommended actions, including the following:

1. It is recommended to say the following prayer for forgiveness seventy times DAILY in this month :

I seek forgiveness of Allah and I ask Him to turn back (to me).

This recommendation is based on the hadith found in Wasaail al-Shia , volume 10, page 509, which states:

It has been narrated from al-Rayaan ibn Salt that he said, ‘I heard Abul Hasan Ali ibn Musa al-Ridha, peace be upon him, say: ‘The one who, every day in Sha’baan says I seek forgiveness of Allah and I ask Him to turn back (to me) , seventy times daily will find that Allah will write his protection from the fire of hell and [his] permission to cross over the bridge (sirat) and will place him in The Everlasting Abode.

2. It is recommended to recite the following supplication for forgiveness, seventy times each day:

I seek forgiveness of Allah, the One whom there is no other entity worthy of worship except for Him – the All-Merciful, the All-Compassionate, the True-Living, the Sustaining and I turn in repentance to Him.

This recommendation is based on the hadith found in Wasaail al-Shia , volume 10, page 510, which states:

It has been narrated from Muhammad ibn Abi Hamza from Abi Abdillah, peace be upon him that he said, “The one who every day in Sha’baan says I seek forgiveness of Allah, the One whom there is no other entity worthy of worship except for Him – the All-Merciful, the All-Compassionate, the True-Living, the Sustaining and I turn in repentance to Him seventy times daily will have his name written in The Highest Horizons ( al-ufuq al-mubeen ).” I (the companion) asked the Imam, peace be upon him, “And what is The Highest Horizons ( al-ufuq al-mubeen )?” The Imam, peace be upon him, replied saying, “This is a plain in the front of the Divine Empyrean/Throne ( ‘arsh ) and in front of it, there are rivers with goblets which number to the amount of stars in existence.”

However we must realize that true istighfar is more than just ‘saying it’ – rather, it is to follow the rule of ABC: Admit our sins; feel Bad and grieve inside due to our sinfulness and resolve to Change.

3. Giving charity ( sadaqa ) for it is recommended to give contributions in this month even if it is as small as half of a date and almsgiving in this month brings about rescue from the hell-fire. In this respect, it has been narrated that when Imam al-Sadiq (a) was asked about the merits of observing the fast in the month of Rajab, he answered, “Why do you not ask about the merits of observing fasting in Sha’baan?” The narrator of this tradition asked, “What then is the reward of one who fasts one day in Sha’baan?” The Imam (a) answered, “The reward will be Paradise, I swear by Allah.” The narrator then asked, “What are the best deeds that should be done in Sha’baan?” The Imam (a) answered, “Almsgiving and asking forgiveness are the best deeds in Sha’baan. Verily, if anyone of you gives alms in Sha’baan, Almighty Allah will breed that alms in the very same way as you breed your small camels. Hence, the alms will be as huge as Mount Uhud on the Resurrection Day.”

The benefits of giving sadaqa are many, however the hadith tell us that some of the special merits include protection from tribulations and a greater provision in our sustenance ( rizq ) which include both material and spiritual gifts.

There are many etiquettes which should be followed when giving in charity and one of the most important is to ensure that we offer it in secrecy and that it is best that it not be done in public, UNLESS there is a greater good which is served by publicizing it.

4. It is recommended to repeat the following prayer one thousand times in the whole month:

There is none in existence worthy of worship except for Allah and we do not worship any other than Him, sincere to Him in our submission even if the polytheists detest it.

This devout rite brings about a great reward. The reward of one who repeats this prayer in Sha’baan is that he will be rewarded as serving Almighty Allah for one thousand years according to the hadith reported from the Noble Prophet, found in Wasaa’il al-Shia , volume 10, page 551, tradition 13,984:

The Prophet, prayers of Allah be upon him and his family, that he said, “The one who says There is none in existence worthy of worship except for Allah and we do not worship any other than Him, sincere to Him in our submission even if the polytheists detest it one thousand times in the month of Sha’baan will be given the reward of having served the almighty Allah for one thousand years.”

5. The daily recitation of the supplication known as the salawaat Sha’baaniyyah,  which has been reported to us from the 4th Imam, Ali ibn al-Husayn Zaynul Abideen (a).

The salawat - prayers upon the Prophet and his family - is something mentioned directly in the Quran in Surah al-Ahzab (33), verse 56 in which Allah says:

Indeed Allah and His angels bless the Prophet; O you who have faith! Invoke blessings on him and invoke Peace upon him in a worthy manner.

In terms of the Islamic jurisprudence (fiqh), the salawaat is an integral part of our daily prayers (salat) and it is contained within the adhaan , iqaama , and is also seen in Salat al-Mayyit .

In addition, it is highly recommended (mustahab) to recite a salawaat upon the Noble Prophet and his family ANYTIME we utter or hear his name or if any of his titles are used (such as Khaatim al-Nabiyyeen ) – even if we are in the state of prayers and we hear his name being uttered around us.

The famous tradition from Imam Jafar al-Sadiq (a) tells us that the salwaaat is the key to the acceptance of our supplications and he has been quoted as saying that, “The supplication refrains from ascending into the skies (and thus being accepted and granted) until the individual making the supplication sends prayers (salawaat) upon the Prophet and his family.”

Why is the salawaat so important? Consider these five possible reasons:

6. Fasting in the month of Sha’baan has been highly encouraged. In Mafaatih al-Jinan we see the following:

PRACTICAL TIP: The recommended prayers (mustahab salat/namaz) can be performed on the go – walking, in the car, bus, etc. and so there is no need to face qiblah and for ruku’ and sajdah, we can perform these via a gesture (ishaara).

As a reminder that if a person has any lapsed (qadhaa) fasts owing, then it is impermissible ( haram ) to keep a recommended ( mustahab ) fast. However, one can “combine” the act and keep their missed fast on a day when it is highly recommended to fast to avail of the rewards of the recommended day of fasting as well as fulfilling their obligation to Allah.

7. Another recommended act of this blessed month is the special munajat of Sha’baaniyyah . The famous scholar, Ibn Khaalawyah reports that this whispered prayer was recited by the Commander of the Faithful Ali (a) and all of the Imams from his progeny. In fact, the late Ayatullah Khomeini has noted that, “I do not recall any other du’a which has been recited by all of the Imams.” It should be noted that all of the issues which the great mystics have said in their detailed books of spirituality have been encapsulated in just a few phrases of the munaajaat of Sha’baaniyyah and the spiritual mystics of our tradition have taken their guidance and spiritual inspiration from such supplications!

In regards to this whispered prayer, the contemporary scholar, Ayatullah Makarim Shirazi has stated that, “If we strive to consolidate all of these spiritual concepts contained in the munaajaat of Sha’baaniyyah , into our heart, we would have been able to travel a long way on our journey towards Allah, the All-Perfect!”

We ask that Allah grant us all the tawfeeq to realize the importance of this great month and bestow up us the strength to accomplish our spiritual growth.

The World Federation is pleased to announce the launch of its updated and improved iSistani app, which is available immediately to download from the iTunes Store or through Google Play now.

Following my brief visit to Gujarat in January 2014 when I had visited a number of madaris in Mahuva and Bhavnagar, it was felt that a follow-up visit for a longer period was required.

The World Federation India Office’s objective to get Scholars and Youths closer to each other was very well achieved during the Holy month of Ramadhan (1435 AH) by organising 4 Sehri Group Discussion Sessions.