When someone says ‘Muslim country’, Myanmar is not a country that would normally spring to mind.  Also known as Burma, this South-East Asian country, with a population of around 60 million individuals, with an incredibly small Shia minority of approximately 20,000, is an emerging hub for Islamic Education.

In Muharram 1434 AH, through sponsorship from The World Federation, Shaykh Jamal Hussain, a young local Hawza student from Myanmar who has spent the last 13 years studying in India and Qum, carried out a variety of Tableegh activities in Myanmar. One such activity was delivering 13 lectures on the topic of ‘Objectives of the Uprising of Imam Husayn (as)’ in the native Burmese language in Taungyyi, a city in Myanmar. He educated the congregation on many aspects relating to Islamic laws (Ahkam). He also travelled to Rangoon, where he lectured in Urdu.

Another task that The World Federation undertook in this attempt to further Islamic education in Myanmar, which took place in Muharram 1434 AH, was the sponsoring of the publication of a book in the Myanmar language on Imam Husayn (as). After the success of this Venture last Muharram, The World Federation sponsored yet another activity with the aim of furthering Islamic education in Myanmar. This time, Shaykh Jamal Hussain held a seminar in Mawlamyine in Burma (Myanmar) on Imam Hasan Mujtaba (as). Approximately 250 people attended this seminar, listening to a variety of content, including the biography of Imam Hassan (as), the sirat of Imam Hassan(as), and the importance of Imamate. And the success continued. The following comment from a participant is testament to this, ‘It was for the first time, I was listening to the comprehensive biography of Imam Hassan. The fact that Imam Hassan was grandson of prophet is unknown to many Muslims.’ 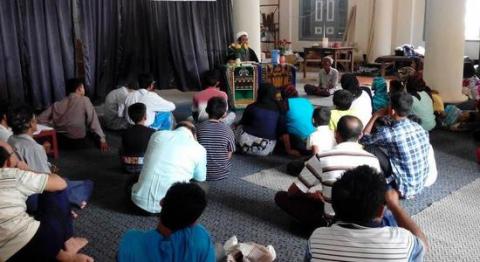 The spread of Islamic Education in the world is an important thing, especially in countries where this knowledge is little known. As Shaykh Husain states: “Shias require the special attention of the wider Shia communities in the world for their economic, religious, cultural and social upliftment. If this does not happen then there will not remain much hope for the progress of Shias in Myanmar. Other Muslim groups have worked well in the region, and we have seen the benefits of their good organisation and their strategic planning, along with financial support. We need to increase our Tableegh, social, and cultural projects.”

This is an amazing endeavour and The World Federation is committed to the continued work to spread the message of the Ahlul-Bayt (as) to rural areas and even further, via majlises, books etc.

"Myanmar has a good potential for Tabligh opportunities. Shaykh Jamal is a vibrant dedicated scholar who has been an influential scholar for the local people.  The whole idea of delegating scholars in this region is to preach the message of peace of Islam"

Once again, I emphasise the importance of the propagation of Islam, and due to this importance, I urge you as the community to donate to this very cause.

The Holy Prophet (S.A.W.) said:  “Paradise shall be (the abode) for one who conveys to my ummah a teaching, which serves to establish a (good) custom or break an innovation.”  Bihaar al-Anwaar, vol. 2, pg. 152.

Kindly donate generously - Your help would be greatly appreciated

Applications for 2018 are closed!

The World Federation's India office, in partnership with India Federation, conducted their seventh annual residential youth camp at Moloobhoy Sanatorium, Khandala in the month of May 2018.

Sayyid Muhsin Tabatabi al Hakim is considered to be one of the most famous scholars for most of the Shia world. After Ayatullah Burujardi, he was among the renowned Maraji of Najaf.