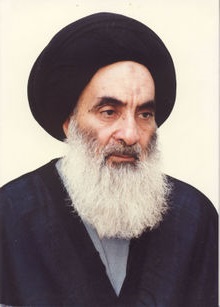 A delegation of the World Federation of KSIMC visited His Eminence Ayatollah al-Sayyid Ali al-Husseini al-Sistani (May Allah (S) grant him a long and healthy life) in Najaf-al-Ashraf on Friday 26th October 2018.  The delegation travelled to Iraq to participate in the Arba’een of Imam Husayn (a) and comprised of the Vice President, Shabbar Dhalla, Executive Councillors Dr Asgher Moledina and Alhaj Safder Jaffer. The delegation was also accompanied by a number of active volunteers from various Jamaats.

His Eminence welcomed the delegation and stated his happiness in meeting with the active volunteers of the Khoja community and prayed for the success of their Ziyarat and in particular, the Arba’een of Sayyid-us-Shuhada (a).

His Eminence continued by reminding the delegation that the World Federation and its constituent members (the Khoja communities) are primarily a religious organisation. Therefore, it was expected that all those serving the institution in whatever capacity including the leadership in particular, should preserve the values of the faith in all aspects of their private and public lives and in their regular dealings with ‘internal’ or ‘external’ parties. This included not partaking in events or gatherings that do not conform with the Shari’ah.

But do not think of those that have been slain in God's cause as dead. Nay, they are alive! With their Sustainer have they their sustenance 3:169

His Eminence also reminded that our a’amal (deeds) were received by the 12th Imam (a) on a weekly basis.  He also spent considerable time reminding the delegation about the importance of adhering to the akhlaq (characteristics) of the A’immah (a) and that meant to deal with people in the best of manner and characteristics such as kindness, humanitarian assistance, gentle guidance etc. and to shun negative values such as jealously, demeaning others, etc.

He stated that excellence in seeking knowledge is a continuous process just as the Prophet (s) advised ‘Seek knowledge from the cradle to the grave’. He particularly emphasised on the need to ponder (tadabbur) over the Qur’an as it opens up further avenues of God Cognisance.

His Eminence further stated that in today’s challenging environment, we need to equip ourselves with the know-how of how non-Muslims are propagating their messages, but to present the message of Islam and the Ahlul Bayt(a) with the akhlaq of A’immah (a).

His Eminence also spent considerable time explaining the need to understand the various pedagogies and approaches used to spread the varied ideologies prevalent today. He stated that Muslims needed to be cognisant of these methodologies and needed to be smarter and a step ahead. He gave the example of ‘hate speech’ and how adverse Muslim reaction to this is used by others to undermine and exploit Islam. He said that even if Muslims are provoked by others, our response has to be measured. Any rebuttals should be respectful and devoid of any temperamental behaviour, otherwise such responses are exploited by vested parties to undermine Islam and the Muslims.

Ayatollah Sistani highlighted this point by describing his constant approach in dealing with the non-Shia in Iraq which has been one of consistent love and affection towards all Iraqi groups in line with the seerah of Imam Ali (a). He said that elders from various Iraqi communities would come to him and refer to the extreme anti-Shia elements within Iraq using certain sensitive terminologies in referring to these fringe groups. His Eminence would respond by stating that these groups are ‘from us’ meaning we Iraqis are all one (i.e. there is no distinction between a Shia, Sunni, or someone belonging to another ideology). He said that he had issued a fatwa published both in Arabic and French after the victory in Mosul to ensure that the forces that liberated Mosul treated people with utmost kindness without questioning anyone as to which madhab they belonged to. Rather, they were to ask them their ‘need’ and how they could be supported.

His Eminence mentioned that when he saw that sectarianism could potentially divide and break the country (into 3 to 6 parts), he adopted to the values of the Ahlul Bayt (a) in demonstrating the best of akhlaq in dealing with all factions of Iraqi society in order to keep them united. He quoted the example of the Battle of Jamal that was initiated by the Mother of the Faithful against Imam Ali (a). After her defeat, Imam Ali (a) told her that he would maintain the same respect in dealing with her as she enjoyed before the battle and ensured that full protocol be provided to her so that she could be escorted back to Medina. Forty women were provided to accompany and escort her back. This is how the Imam (a) treated opponents and His Eminence felt our akhlaq should emulate that of the A’immah (a) (i.e. our akhlaq should promote harmony through tolerance and should be devoid of speech or actions that cause sectarian strife). He also referred to the book written by George Jordac, a Christian Lebanese author, entitled ‘Voice of Human Justice (صوت العدالة الإنسانية)’, wherein a Christian was attracted by the akhlaqi values of Imam Ali (a). His Eminence repeatedly stated that this was one of the best way to propagate Islam especially in today’s challenging environment.

When the youths in the delegation asked His Eminence to give them some specific advice, he stated the following:

1. Deal with people in a way that you perform subtle tableegh i.e. through exemplary actions without the need to utter a single word. If, angry, speak with wisdom; be trustworthy in daily dealings; respect all segments of society, etc.

2. Impart knowledge with akhlaq. He stated that the akhlaq of a madrasah teacher has a bigger impact on a child than the imparting of the knowledge itself. He gave specific examples where secular education (devoid of any religious teachings) is taught by practicing Christians to inculcate Christian values to the students in a subtle way. He emphasised that the teachers’ characteristics spoke more that the knowledge the teacher was imparting. He specifically referred to humility and humbleness as key attributes of success and emphasised the need to develop these attributes especially amongst people with responsibilities such as community leaders, teachers, volunteers etc.

The meeting ended with lots of du’as from His eminence for the continued success of the community in this world and hereafter. He stated that he always remembers all of us by name (mo’mineen from each continent) in his regular du’as after Fajr salah.

The delegation then called upon Hujjatul Islam Syed Mohammed Sistani, son of His Eminence Ayatollah Al-Sistani, who welcomed the delegation and expressed pleasure to see proactive leaders and volunteers serving the community selflessly.

He stated that preserving the Khoja democratic norms of Jamaat elections and constitutional governance was a bounty from Allah (S) showered upon the Khoja community and that this should be protected at all costs. He said that sadly the Shia world suffered from governance challenges due to lack of democratic norms and had others followed the same principles as the Khoja community in managing their affairs, the Shia community would be much better off today. He stated that the Khojas were a role model for Shia communities as they have managed to preserve democratic values in running their affairs by establishing democratically elected jamaats, federations and the World Federation.

Syed reiterated the message of His Eminence in ensuring that leadership at all levels of our institutions abide by basic Islamic principles and not to compromise on Islamic ethos in private or public life. He acknowledged that whilst it was challenging to constantly preserve these values, constant reminders and enjoining each other towards taqwa on regular basis was effective in keeping the checks and balances in place.

He stated that the Khoja community, that has given so much to the wider communities in the fields of governances, education, economic upliftment etc. and who are well known for this, should now focus (and have the ability) to give even more emphasis to the preservation of faith, culture and identity and to transfer these effectively to the next generation.

A question was raised by the youths present within the delegation whether they should participate in political activities especially related to defending human rights. Syed stated that this was an important duty for every Muslim, both as an individual and as a community, to the extent that the environment around allowed (political).

The delegation spent quite some time discussing and sharing experiences on the new and modern approaches of nurturing children and youths today. There was acknowledgement that the current traditional norms of preaching (such as the mimbar) had its place but was clearly not enough and much more was needed to be done. Modern approaches to reaching out to the younger generation were critical to preserve our faith including using social and sporting activities as a means to inculcate Islamic values. Syed felt the challenge faced by Islam was bigger than that faced by Christianity. Christians are also concerned about their new generation losing their Christian heritage, but that the challenge with Christians was only to preserve their ‘faith’, whereas for Muslims it is not only to preserve ‘faith’ but also the essential ‘practices of faith’ (the ahkam e.g. prayers, fasting, halal, haram, etc).

The youths mentioned that the western values of freedom of expression had led to many challenges against the faith including the growth of liberal and pluralistic views. Syed felt that the freedom of expression was actually an opportunity to openly propagate the true values of Islam. We should use these new approaches to get the true message of Islam to the new generation by applying modern approaches (i.e. by using the same modus-operandi used by the liberals to inculcate the true values of Islam). Syed stated that His Eminence’s office had invested in developing new approaches in propagation such as developing short and precise 3-4 minute video clips (that are meticulously produced taking care of every aspect of human psychology, finishing, background voice etc). He stated that these days these short clips and social media are powerful tools in educating the younger generation. Even story books and value-based toys produced for children at madaris are powerful tools if developed using modern methodologies. He stated that the Christians and others had adapted to modern approaches in conveying their message and were still finding the task challenging. Hence, Syed also emphasised on the need for aklhaq as another important approach in propagating the faith to the new generation. He reminded the audience that akhlaq was a pillar of faith and thus is bound to have a major impact in the nurturing of the new generation [This point complemented what His Eminence had stated earlier. There was a lot of emphasis on akhlaq during both visits].

The delegation then discussed various avenues of ongoing support for the Islamic education activities of the World Federation and there was a good exchange of ideas on a number of subjects. Syed Mohamed Ridha expressed his full support and emphasised that Najaf was always there to support the endavours of the Khoja communities.

Day Nineteen Feed Your Soul Speak Up for what is Right

The World Federation is pleased to introduce a series of videos to help us acquire closeness to Allah (swt). The first 5 videos will be an Introduction to Shahr Ramadan and for the rest of the Holy month we will focus on Akhlaq. Click here to watch Day 19.

The Islamic Education Department of The World Federation recently published 3 books on the request of Sheikh Mahmood Fayyaz’s Najaf Office.

Due to an increased demand and a need from the young adult youth folk in search of their spouses, The World Federation and The Council of European Jamaats organised a pre-marriage workshop titled: ‘A 5 Step process to finding the right spouse’ on 12 January 2014, at the Hyderi Islamic Centre, South London.