The World Federation's Khoja Heritage Project (KHP) Team are pleased to introduce an interactive online course called Khoja Studies Course that will run for 1 hour every Tuesday for 10 weeks.

The course starts on 10th April and will end on 12th June, Insha’Allah. Enrolment submissions for this course has ended on 6th April 2018. To reserve your place, complete the application form which can be found here. Applications are now closed.

This online interactive course will be presented by Dr Hasnain Walji, Former President of the WF, currently the Chair of the KHP. Dr Hasnain Walji a verbally spoken historian who has been engaged in community service for the past four decades and recently produced a two-hour documentary "The Khoja’s - A Journey of Faith”.

This course will assist the participant to understand the Khoja history from where it started and at which stage we are at the moment. We will discuss and examine the important accomplishments of the Khoja heritage which will further help the participant to appreciate the community’s collective efforts.

The milestones of the community history will be explored through the interactive style presentation which will also provide ample time to deliberate on the issues which may arise during or after every session.

It is all about learning the history from someone who has lived through some of these events.

We will initially begin with discussing the ideological and cultural influences of the various castes of Indians of the tenth century. The course will examine the contribution of the various missionaries in articulating Islamic beliefs in an indigenous framework.

Afterwards, we will highlight the political events of British colonial India and extensively discuss its impact on local communities, including Khojas.

A significant amount of the course would require us to go over the milestones of the then latent Khoja Shia Ithna Asheri Community, which will eventually lead to being a key player in the current global Khoja environment.

Dates: Every Tuesday from 10th of April

Topics to be covered:

7.    Arrival of Qadar Hussein in Mumbai

9.    Hajj Naji Emerges and the Era of Tabligh

10.   Institutionalization of the KSI Community globally

Feedback from the course:

Thank you to everyone who joined and participated on our weekly Khoja Heritage course.  From the questionnaire we sent out, we understand the attendees enjoyed the course and their knowledge and understanding about Khoja Heritage increased since being on the course. Majority stated the content was well thought out and presented well and had more than they were expecting. Overall they were happy with the fact it was interactive course, meaning they were able to ask questions freely and felt the course outline was well structured.

Here's what some participants said they liked the most:

"Listening to someone who has lived with this history"

General feedback from the course:

"I would to thank you most sincerely for this sharing, for the knowledge, time and humble service. May Allah bless you with immense inspiration and barakat. Salaam."

"I really appreciate this initiative of the WF of KSIMC. It was indeed enlightening. Thank you."

"Thank you for providing this course to help us learn about the roots and history of our community, and making the course available free of charge."

"Keep up the good work"

If you would like to hear the audio lessons and like to attend future courses please email us at: 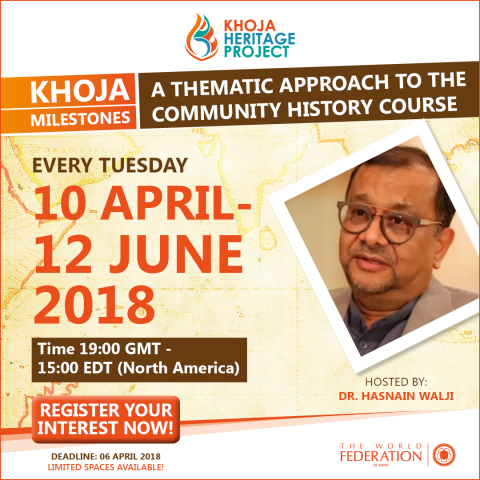 LIVE SHOW on Longing for the Imam During Times of Crisis

Click here for details on our first LIVE SHOW on "Longing for the Imam During Times of Crisis - Signs of Reappearance - Dealing with COVID-19". Airing on our website, Youtube channel and on Ahlulbayt TV.

We've recently added two new additions to our Islamic Education department and would like to introduce to you them. Click here to find out more.