Day Eleven Feed Your Soul Make Peace with your Brothers

The faithful are indeed brothers. Therefore make peace between your brothers and be wary of Allah, so that you may receive [His] mercy 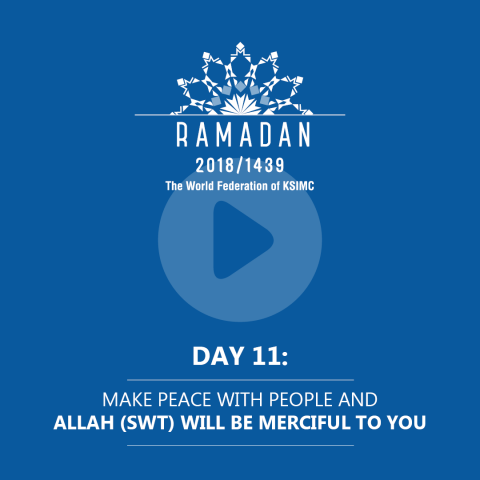 The fact that the phrase under discussion says: make peace between your brothers and not make peace between brothers is in order to have made the most subtlest of expressions in the shortest of sentences because this sentence communicates two things: one, that the two groups that are fighting with each other are brothers to one another and peace must be made between them and second, that all Muslims are brothers to the two parties involved in fighting and they must adhere to brotherhood and make peace between them. 1
In this verse and the one before it, the command to make peace has been mentioned thrice which shows the importance that Islam gives to peace and love between people of the society. The previous verse advises to make peace with fairness ad this verse advises that in making peace one should fear God; if one has been accepted as a mediator in making peace, he must keep God in mind while giving a ruling not that his peace-making results in oppression of one of the parties. 2
The verse is telling us: To the same extent as you would try to make peace between two related brothers, you must also seriously and decisively make peace between hostile believers.
What a beautiful and attractive statement! All believers are brothers to one another and the discord between them is called as the discord between two brothers which must be resolved in peace and friendship as soon as possible. Thus, one of the most important social responsibilities of the Muslims into one another and in executing social justice with all its aspects is mentioned in this verse.  3
One of the Divine blessings that God has mentioned in the Quran is bringing together the hearts of the Muslims: He brought your hearts together (Sura Ale Imran: 103) and making peace between two people has been considered a cause for receiving God's mercy and forgiveness: But if you are conciliatory and God-wary, Allah is indeed all-forgiving, all-merciful (Sura an-Nisa: 129). 4
Islam has put down particular laws for conciliation between people:
1. Lying which is one of the major sins is not considered a sin if it for conciliation and making peace between people.
2. Although it is obligatory to honor one's promises and forbidden to break it, but if one makes a promise not to make peace between two people, Islam allows the breaking of this promise: Do not make Allah an obstacle, through your oaths, to being pious and God-wary, and to bringing about concord between people (Sura al-Baqara: 224).
3. Even though acting upon a dead person's will is obligatory and forbidden to not do so, but if acting upon it results in enmity between people Islam allows that the will not be acted upon so that peace rules between them: But should someone, fearing deviance or sin on the testator's behalf, set things right between them, there is no sin upon him. Indeed Allah is all-forgiving, all-merciful (Sura al-Baqara: 182). 5
Messages:
1. Preventing discord and enmity and making peace between others is everyone's responsibility, not just a particular group as evidenced by setting things right between them.
2. The one making peace must also consider himself to be a brother to the parties involved in the disagreement: make peace between your brothers.
3. Peace and friendship are the preludes to Divine mercy: make peace between your brothers and be wary of Allah, so that you may receive [His] mercy.
6

Sayyid Muhsin Tabatabi al Hakim is considered to be one of the most famous scholars for most of the Shia world. After Ayatullah Burujardi, he was among the renowned Maraji of Najaf.

HED Program – I Hear, You Listen? Enabling Effective Communication with the Deaf Community.

A summary written by Ammaar Habib Hussein, a student of the Higher Education Department (‘HED’) class at SI Madressa, Stanmore.