The first 5 videos are an introduction to the Holy Month of Ramadan.

Qur'an - A Book for Life

The month of Ramadan is one in which the Qur'an was sent down as guidance to mankind, with manifest proofs of guidance and the Criterion. So let those of you who witness it fast [in] it, and as for someone who is sick or on a journey, let it be a [similar] number of other days. Allah desires ease for you, and He does not desire hardship for you, and so that you may complete the number, and magnify Allah for guiding you, and that you may give thanks. 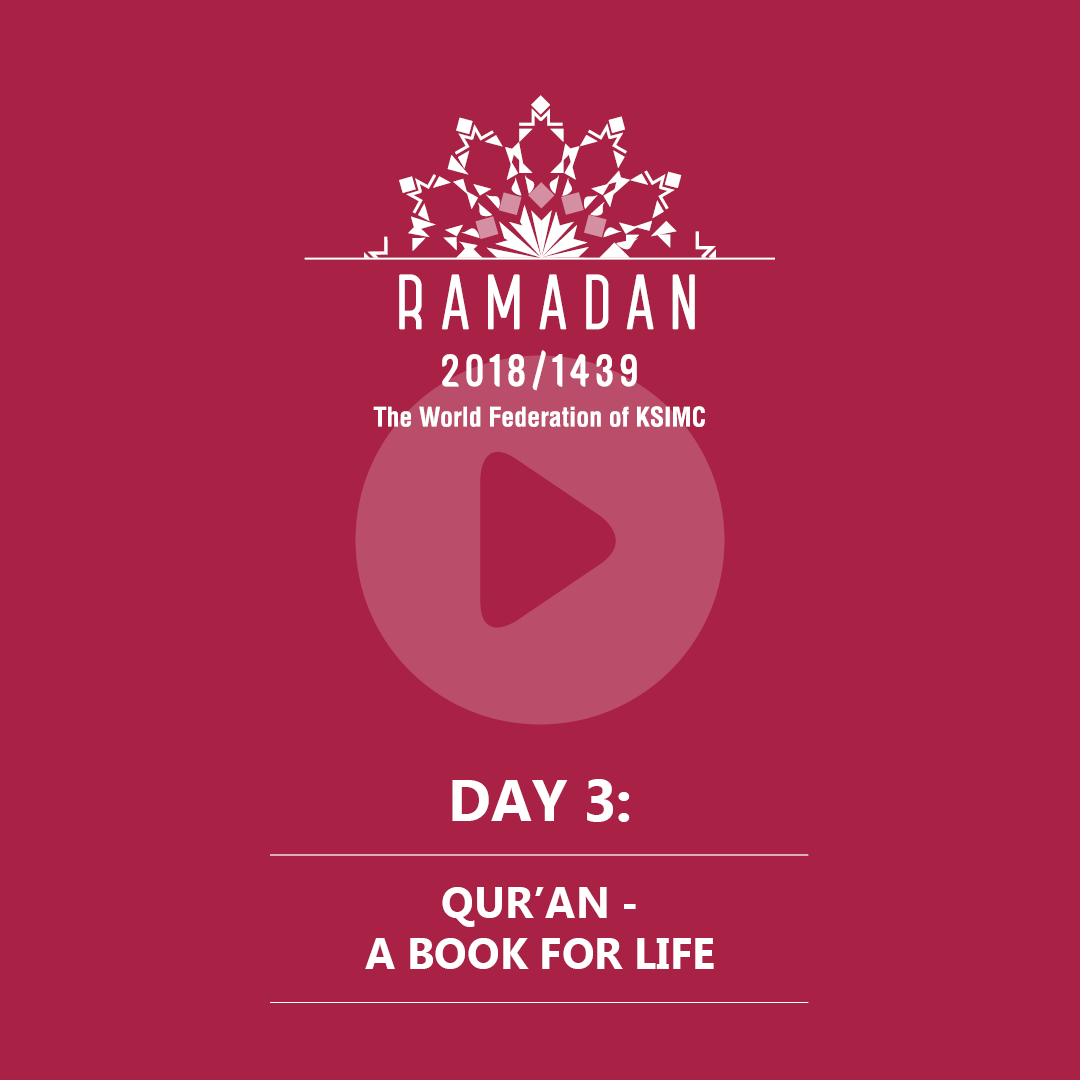 The word 'nuzūl' means to come down and to arrive from a high point and the difference between the words 'inzāl' and 'tanzīl' is that 'inzāl' means to come down all at once and 'tanzīl' is to come down gradually. This verse and a few other verses (sura al-Qadr: 1; sura al-Dukhan: 2) which show that the Quran was revealed all at once is attributed to the revelation of the reality of the Quran i.e. the clear book (kitabun mubin) on the heart of the Prophet (s) on one night in the same way that the Quran after becoming something that man can understand and read and became detailed, was gradually revealed over a period of the 23 years of the Prophethood of the Prophet(s).
Quran is named so because before it was not from the material of things that are able to be read and in order for it to fit into the understanding of man Allah sent it down and therefore it became a readable book and this word applies to both the whole of the Quran and also to the parts of the Quran.
Some narrations showing the importance of the Quran:
The Holy Prophet (s) has said: “The best of those amongst you is the one who learns the Qur’an and then teaches it to others.”
The Holy Prophet (s) has said: “Everything in existence prays for the forgiveness of the person who teaches the Qur’an - even the fish in the sea.”
The Holy Prophet (s) has said: “These hearts rust just as iron rusts; and indeed they are polished through the recitation of the Qur’an.”
Imam Ali (as) has said: “The house in which the Qur’an is recited and Allah, The Noble, and Grand, is remembered will receive numerous Divine blessings (barakah), the Angels will be present, and the Satans will be distanced from there. In addition, that house will shimmer for the people of the sky, just like the stars shimmer for the people on the Earth.”
The Holy Prophet (s) has said: “The superiority of the Qur’an over the rest of words, is like the superiority of Allah over His creations.”
Imam Zaynul ‘Aabidin (as) said: If all who live between the East and West parish, I will have no fear as long as I have the Qur’an with me.
The famous Muslim philosopher, Mulla Sadra in his commentary of sura al-Waqiah writes: I studied the books of the wise men profoundly till I thought that I am someone great, but as soon as I gained insight I saw myself empty of real knowledge and at the end of my life it occurred to me to ponder over the verses of the Quran and hadiths of Muhammad (s) and his progeny. I became certain that my previous work was without foundation because for the whole of my life I had stood in darkness instead of the light. My soul and heart burned in anguish until the Mercy of Allah took hold of me and made me familiar with the secrets of the Quran and I started to write a commentary on and ponder over the Quran and I knocked on the doors of revelation; the doors opened and the curtains were cast aside and I saw that the angels are saying to me: Peace be to you! You are welcome! Enter it to remain [forever] (sura al-Zumar: 73). Now that I have started writing about the secrets of the Quran I confess that the Quran is a deep ocean that one cannot enter except through the grace of God but what can I do that my life is short and my body feeble, my heart is broken and my capital is low, my tools are deficient and my soul is small.
The greatness of the Quran is shown in many verses of the Quran, for example: Had We sent down this Qur'an upon a mountain, you would have surely seen it humbled [and] go to pieces with the fear of Allah. We draw such comparisons for mankind, so that they may reflect (al-Hashr: 21).

Through the support provided by The World Federation, NISA has been able to print and distribute their magazine, which aims to show a compassionate face of Islam by promoting family values. The magazine has been very well received and reaches 1500 homes.

Shias on social media faced a mini-viral syndrome following the death of King Abdullah bin Abdul Aziz Aal e Saud of Saudi Arabia. Traditions predicting that the time of the Re-Appearance of our Imam (atfs) were being posted, liked, shared and re-tweeted everywhere.

The World Federation is pleased to announce that applications are now open for an Islamic Short Course for couples, to be held in Qum. The course is ideal for couples to gain a deeper understanding of Islam for the future of their lives together.