The World Federation in collaboration with The Africa Federation, was blessed with an amazing opportunity to contribute towards various Muharram programmes held in multiple local Shia centres across Africa. These activities took place in the month of Muharram, which is a period to commemorate the great sacrifice made by the grandson of the Holy Prophet (saw). Alhamdullilah, the programmes were received extremely well and had a positive impact on the local communities.

The first example was the Bilal Muslim Mission of Kenya. This had included lectures at Bilal Hall in Mombasa where evening programmes were organised during the first 10 days of Muharram. Recitation of the Holy Qur’an followed by lectures, poems and nawhas in Kiswahili were part of these programmes. The programme ended with recitation of Ziyarat and Niyaz.

There were also radio programmes which included live telecasts which had been broadcasted on Pwani FM of lectures that were presented during the Majaalis at the Bilal Hall, Mombasa. Topics for the first five days were on ‘Peace and Unity’ by Sheikh Dumilla and the last five days on ‘Development and Self Reliance’ by Sheikh Hassan Rocky in the light of the message of Karbala.

Finally, in the Bilal Muslim Mission of Kenya, all 15 centres conducted majaalis in the evenings during the first 10 days of Muharram. Centre in-charges and officers from the Quality Assurance and Standard Department (QASD) joined hands in taking part in activities and were assigned to different centres. Special programmes for ladies were hosted that were facilitated by Mubalighat from Az-Zahrah Madrasah of Mombasa in collaboration with sisters from WIPAHS in Tanzania. 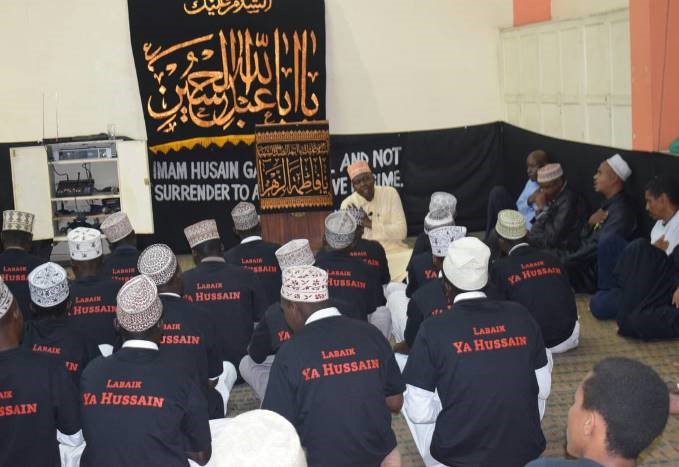 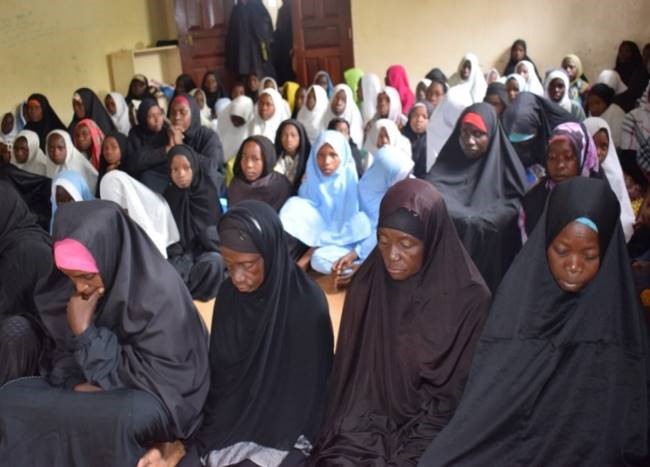 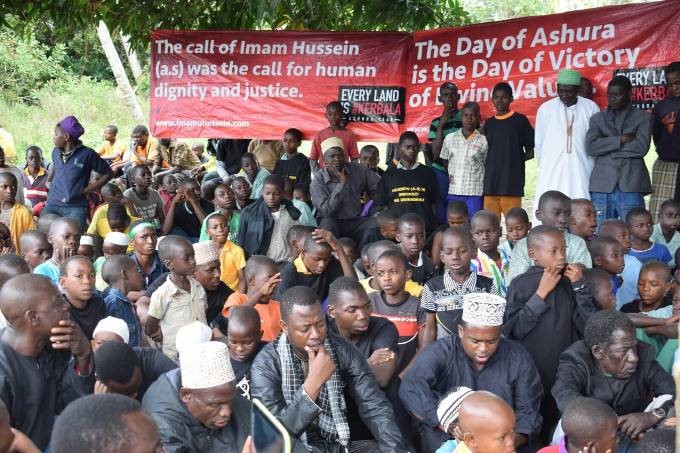 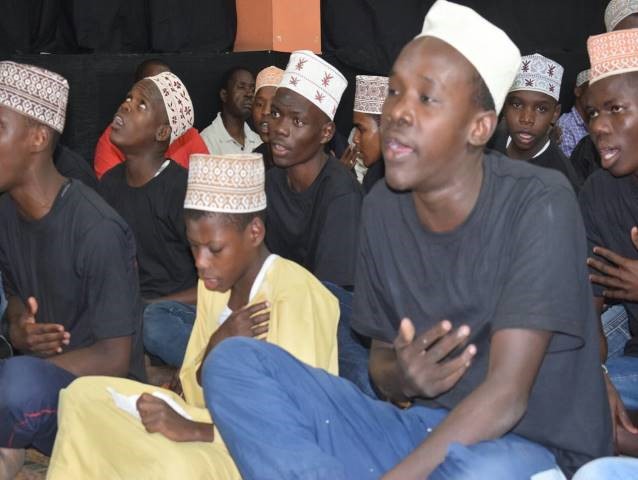 In Bilal Muslim Mission of Tanzania, the head office had printed over 2,500 Islamic Calendars in Kiswahili, over 600 T-Shirts had the Karbala message distributed to various centres and books on the significance of Muharram were also printed and distributed. All the centres throughout Tanzania organised gatherings of Muharram lectures with eulogies.

Daily majalis were also held within the Lake Zone Region which consists of Bukoba, Nshamba, Karutanga and Kishuro Kanazi. This allowed the people to join hands and participate in the procession (Juloos) with the KSI Jamaat of Bukoba. This centre was also used for blood donations. This allowed the Jamaat to donate the highest units of blood in its history.

Majority of blood donations were from the regional hospital in Kigoma. 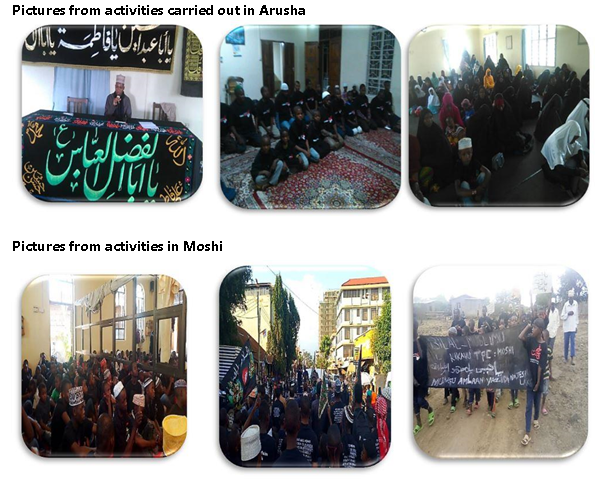 For the Ahlul-Bait Foundation – LAMU, there were daily majalis at all the centres. There were Hawza teachers to help assist with this. In addition, there was also an Annual Ashura Procession which had taken place. 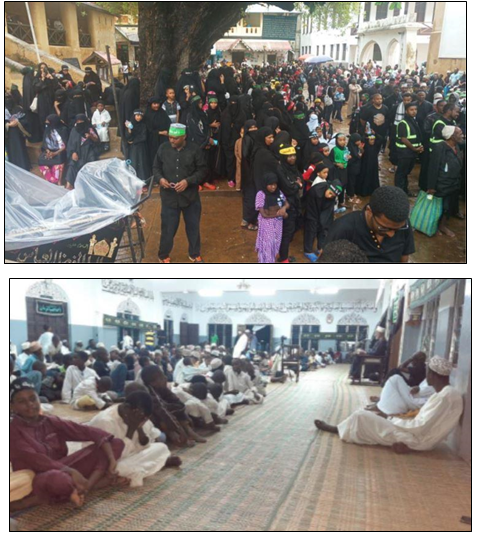 In the Bilal Muslim Mission of Lamu, there were daily programmes for 10 days which was held in three centres in the Count of Lamu (Masjid Ithna-Asheri Mosque, Madrassa Imam Ali in Kandahar Village & Witu) and members from all three centres also participated in Juloos in their respective areas.

The missions theme for this Muharram was the involvement of children, youth and women for the future. 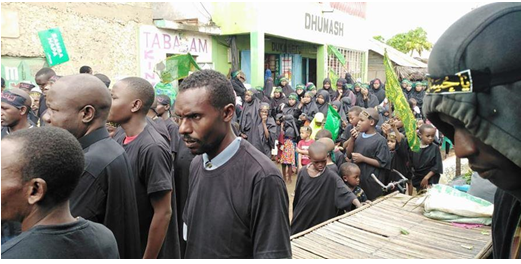 At Maj'maa-el-Itrati Twahira in Rwanda, the organisation conducted Aza-e-Muharram Programme in 16 of its centres to commemorate the martyrdom of Imam Husayn (as). They held daily lectures, Latmiyyah, congregational prayers and food distribution programmes in all the 16 centres. Some centres also managed to hold blood donations. 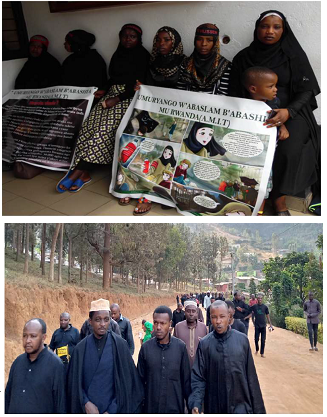 For the Islamic Tabligh-Bait (A.S.) Rwanda, The Organisation conducted Aza-e-Muharram Programme in 5 centres which included daily majlis, Latmiyyah, namaz and niyaz. Blood donations were also held at some of these centres. 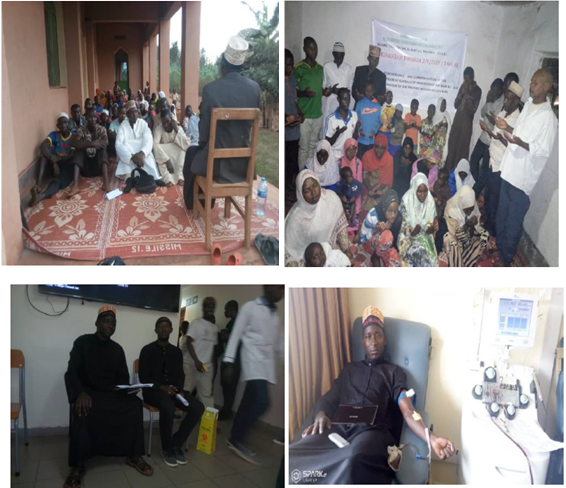 For the Bilal Muslim Mission of Uganda, there were programmes which included lectures, Latmiyyah and the daily prayers which were then followed by nyaz in all the centres. There was also a distribution of Islamic calendars to the centres which were then given to everyone. Finally, they also held an Ashura procession. In the Institut of Islamique de Madagascar (INISMA), daily lectures, Latmiyyah and congregational prayers were held at all centres and nyaz was served. Also, members of the Khoja community visited some centres and joined the local Community in commemoration of the Aza-e-Muharram. The World Federation India Office in partnership with KSI Jamaat Mumbai conducted Workshops on Ahkam-e Mayyit on 9 February 2014 for gents and ladies. The Workshops were well attended by 45 participants. There were a few participants who were as young as 15 years of age.

The workshop aims were to give practical training to the participants on:
• How to handle a Dead Body with Respect
• How to conduct Ghusl, Hunut, Kafan
• How to conduct Namaz-e Mayyit, and Burial
• The rules concerning Post-Burial

The World Federation India Office Organises a Camp for Girls

Want to invest in Your Children’s Islamic knowledge?

This is your chance to buy 3 Children's books @ £9.00 only with *FREE SHIPPING
(Exclusive offer ending on 16th Nov 2014)
Don’t miss this UNIQUE opportunity !! to order your copy NOW click here