Following my brief visit to Gujarat in January 2014 when I had visited a number of madaris in Mahuva and Bhavnagar, it was felt that a follow-up visit for a longer period was required. My wife Shamimbai and I went to Kutch and Gujarat during June and July for just over 3 weeks. We spent part of the holy month of Ramadhan there.

We spent 5 days in Kutch, visiting our centres and madaris in Bhuj, Kera, Nagalpur and Mundra. Muhsinbhai Dharamsi accompanied us. In each of these places, the madrasah is held 5 to 6 days a week in the mosque. There are around 25 children aged 4 to 12 in each madrasah and classes are conducted by the resident alim. All the children sit together in one room and are taught Qur’an and Diniyat on a one-to-one basis. Children are taught in a very traditional way whereby huge emphasis is placed on memorisation and rote learning. The medium of teaching was Gujarati. 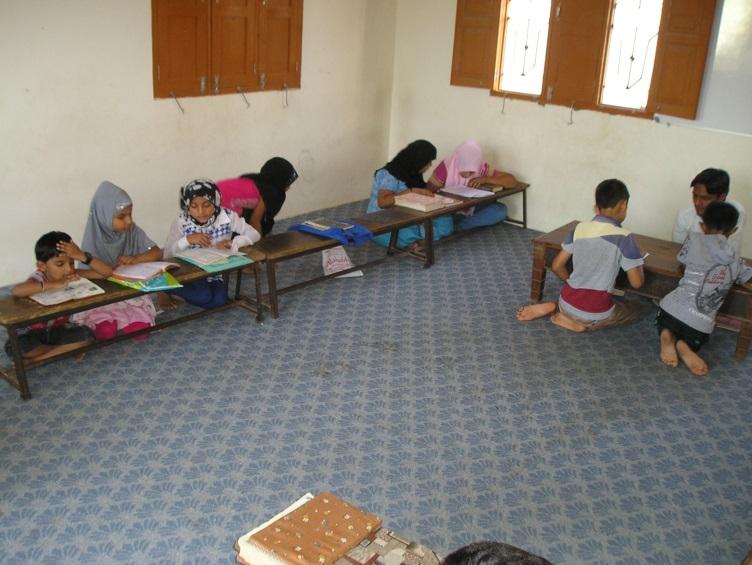 I conducted some activity based lessons from the Qur’an with the children, using pictures, questioning, stories, etc. The engagement from the children was remarkable in every lesson. It was quite evident that the children were bright and showed a lot of enthusiasm. In Mundra, I had started doing a session with a group of 5 or 6 boys and within minutes all the other boys deserted the alim and joined our group. The girls insisted that they should also have a similar lesson, which went down even better. A parent commented later that their daughter came home and told them that the lesson was superb. The alims accepted that the activity based lessons were more effective, interesting and enjoyable. 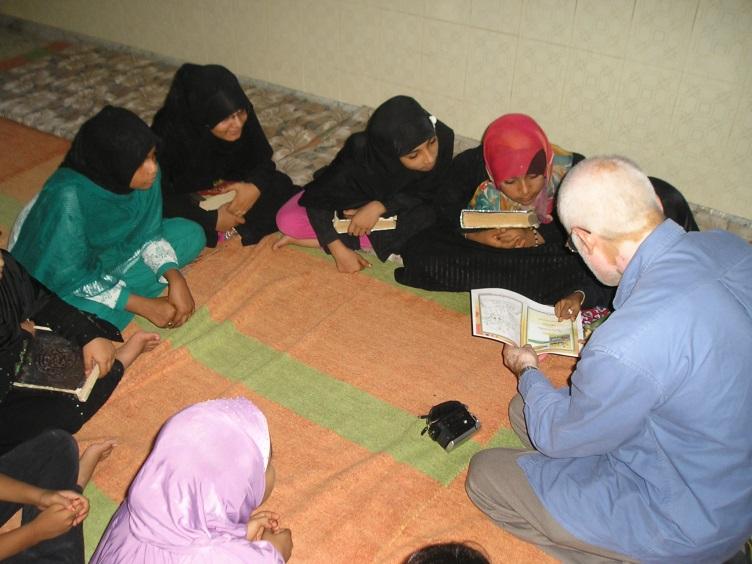 On the last day, Muhsin bhai and I had a meeting with the alims and an ‘inspector’ from Tanzeemul Makatib. We explained to them why it was necessary to change the method of teaching in madaris.

In each of the towns, at the insistence of the ladies, Shamimbai conducted tafsir classes of short surahs. These made a huge impact. The ladies said they have never had such classes before and pleaded that Shamimbai should stay there longer (especially in Nagalpur).

We spent 8 days in Mahuva. I visited 8 of the madaris which were run by Shaban Trust. I was accompanied by the local Alim who was employed by Shaban Trust to oversee the functioning of the madaris. The format of classes and methods of teaching was similar to that in Kutch except that in some madaris there were over a hundred children and they were grouped by age.

Once again, I conducted short teaching sessions in the madaris that I visited. The children who participated were very excited. In one madrasah, I selected two of the mature girls who had participated in the lesson, to teach the same lesson to a group of younger children. They did an excellent job.

On one of the days, I held a 4-hour training session with the madrasah teachers by using sections from the Neuropsychology and Teaching Skills Programmes. About 20 teachers attended, including 8 Alims who teach in the madaris. The participants found the programme so useful that they asked for a follow-up session for the female teachers only. This was undertaken on the following day. 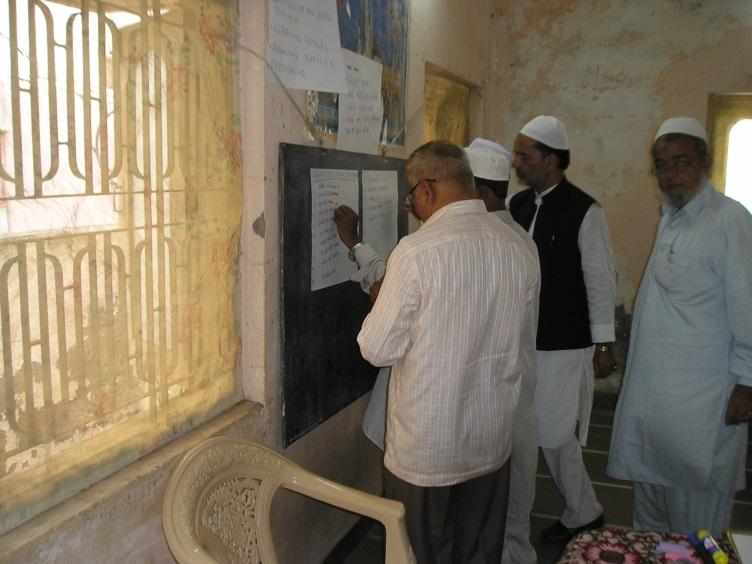 Alims participating in the training session in Mahuva

Maktab Sakina was one of the all-girls madrasah that I visited. It had good facilities (assembly hall, 6 classrooms, office) and the girls were taught by age group. 7 of the teachers had attended the second training programme that I had held. The principal of the madrasah was very keen for MCE to work with them.

In the Jaffery School (run by Husaini Education & Welfare Trust), I attended a couple of moral lesson classes and gave feedback to the teachers to adopt a more learner-centred approach.

Meanwhile, Shamimbai was conducting daily Qur’an tafsir classes at the Khoja mosque (where up to 200 ladies were attending) and at two girls hostels. 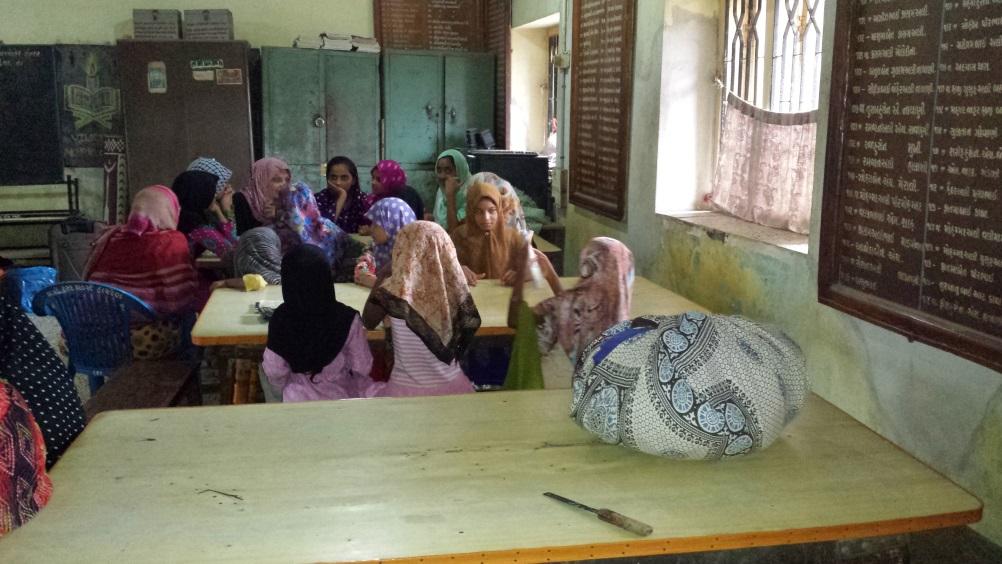 For the last 12 days, we were in Bhavnagar where we had a packed schedule. I focussed on one main madrasah for girls (Najafi Education) and daily Qur’ankhani for children which was held at Mahdi School, next to the Ali Shah centre.

At the madrasah, I worked with one class for a few days to improve their makharij and ran some activity based lessons. The Principal of this madrasah insisted on me doing a short training session for the teachers and was delighted to hear from me that MCE would like to work with them for piloting.

At the Qur’ankhani, I took a group of 7 to 9 year old boys and helped them to improve their recitation. At the end of the Qur’ankhani, I held interactive 20-minute tafsir sessions on Surah Asr and Surah Zilzal with over 35 older boys. These sessions proved to be extremely effective. On the day before I was leaving, some of the boys came to me and said, “Sir, please extend your stay. Miss your flight. Come back again”. 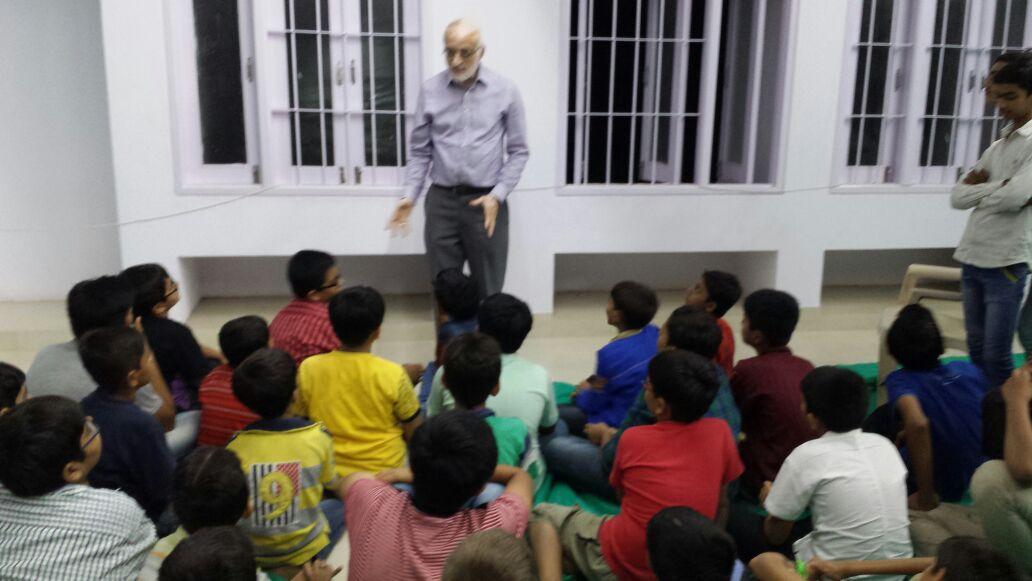 As in Mahuva, I ran two 3-hour training sessions at Mahdi School in Bhavnagar for about 20 madrasah teachers. The feedback was overwhelmingly positive. The teachers emphasised the urgency of producing the MCE lessons in Gujerati. 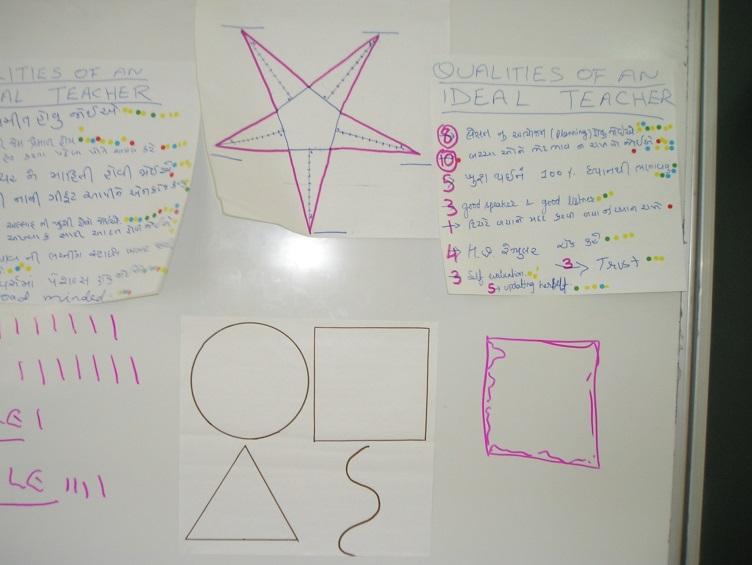 Shamimbai undertook tafsir classes daily at 3 centres – Najafi Education, Ali Shah Centre and Dilair Bagh. The ladies were impressed with the classes because they felt that they had not gone into such depth into the verses of the Qur’an. There were other centres who wanted such classes but it was not possible to accommodate them all. A few sessions were also held for little girls. 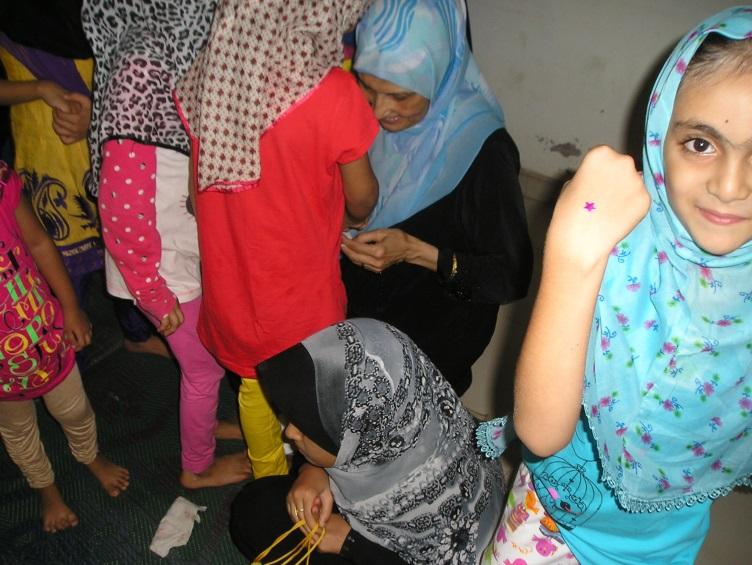 Children being rewarded for their participation

My sincere thanks to Muhsin bhai Dharamsi for looking after us throughout the visit and making all the necessary arrangements. A word of gratitude to Hasinabai Bachoo and her Qur’an teaching team in Stanmore for sharing their notes and teaching practices with us.

Head of Madrasah Centre of Excellence

Quran Recitation in Qom and Mashhad

The holy month of Ramadan is being observed reverently in the holy cities of Mashhad and Qom at Iran.

This is an un-edited translation of selected sections of the book entitled The sunshine of Wilayat
(والیت آفتاب) from the esteemed scholar, Ayatullah Misbah Yazdi, with the hope that any benefit the
honourable reader derives from it would please the heart of my master, الفداء له روحی.

The World Federation of KSIMC is facilitating payments for Zakat al-Fitrah, Fidyah and Kaffarah