Donation comes along with a pledge to raise a total of $250,000 over five years for the new hospital

Vaughan, ON, June 5, 2016 – The Jaffari Community Centre (JCC), is helping to strengthen the city of Vaughan’s healthcare with a contribution of $50,000 toward the new Mackenzie Vaughan hospital. At an open-house community BBQ fundraiser, JCC also pledged to raise a total of $250,000 over the next five years to support the hospital. 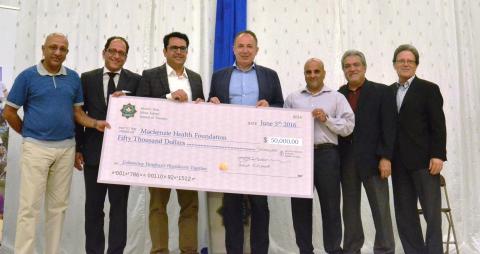 “Today we give back to the community that has nurtured us, nourished us and allowed us to flourish together,” said Shabbir Jeraj, President of the Jaffari Community Centre. “The Jaffari Community and Mackenzie Health share a vision for the city of Vaughan: one where our healthcare needs are transformed, where more jobs are created and where our citizens can thrive physically, economically and socially.”

Vaughan Mayor Maurizio Bevilacqua said, “Health and wellness are important goals for everyone in our community, and improving access to healthcare is a priority for Vaughan Council. The new Mackenzie Vaughan Hospital will bring vital services to our residents, including a state-of-the-art emergency department, critical care and surgery.”

The Jaffari Community’s contributions will be directed towards the Mackenzie Health Foundation’s $250-million fundraising campaign, dubbed Exceptional Care Belongs Here. The campaign aims to cover the community’s share of the project, which includes equipment, furnishings and a portion of the hospital construction costs. 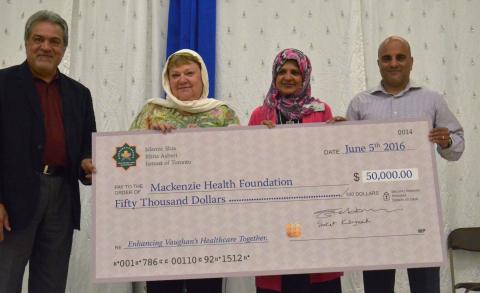 “The community has played a pivotal role in moving this project forward, and I would like to extend my gratitude to organizations like the Islamic Shia Ithna Asheri Jamaat of Toronto for their generous contributions to investing in the health of our residents and city. It is truly inspiring to see the community work together to improve access to healthcare for those who live here,” Bevilacqua continued.

The Mackenzie Vaughan Hospital is the first new hospital to be built in the Southwest York Region in more than 50 years and is expected to serve the people of Vaughan, Richmond Hill and the surrounding communities. At the event, President and CEO of Mackenzie Health, Altaf Stationwala said, “The Jaffari Community is all about volunteerism. I see it every day – from our board rooms to our patient rooms. Mackenzie Health is most thankful for all the support and we are very excited to see this project become a reality.”

“We are a longstanding partner in the effort to serve the people of Vaughan and we are eager to deliver on our commitment to continue to raise funds for the new hospital,” said Jeraj. “The Jaffari Community has been part of the fabric of the Vaughan community for the past 15 years and remains committed to being good neighbours and a model community.”

Everything you need to know about the Madrasah Centre of Excellence (MCE) can be found here for 2019.