This worldwide movement is all about working hand in hand with individual people, businesses, NGOs and governments to improve the economic and social conditions of our global community.

WHERE WERE THE MDGs FORMED?

At the Millennium Summit in September 2000, the largest gathering of world leaders in history adopted the UN Millennium Declaration, committing their nations to a new global partnership to reduce extreme poverty and setting out a series of time-bound targets, with a deadline of 2015 that have become known as the Millennium Development Goals (MDGs).

WHAT ARE THE MDGs? 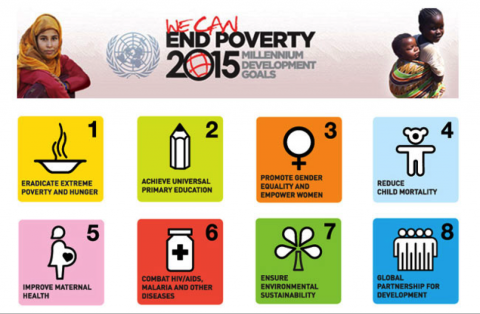 HOW HAS THE WORLD FEDERATION CONTRIBUTED TO THE MDGs?

The World Federation has been an active participant in achieving the MDGs by providing feasible solutions for the diverse challenges faced by men, women and children around the world who lack basic provisions in regions of deprivation, war and natural disasters. These solutions include a number of programs and initiatives in partnership with our Regions, agencies and donors from across the world.

With 2015 being the target date to achieve the MDGs, The World Federation will share its key achievements as an organisation towards the Millennium Development Goals through this newswire over the next few weeks.

The World Federation has been participating in the MDG challenge to show that no one is alone in our world and that this sentiment is one that is reflective of our community as a whole. We take this opportunity to thank each one of our Regional Federations, agencies, donors and community members for working together for the betterment of humanity.

Stay tuned for the next newswire when we will feature key programs and initiatives carried out to achieve ‘GOAL 1:  Eradicate Extreme Hunger and Poverty’.

The World Federation of KSIMC is excited to introduce our daily 'Shahr Ramadan - Feed Your Soul' series. Click here to watch videos uploaded so far.

Loyalty & Altruism: The Shrine of Al-Abbas (a)

Shaykh Mohammed Al-Hilli takes us on a journey the shrine of Al-Abbas (a). Watch the teaser and promo video here and find out when you can watch the documentary on TV.

In the afternoon of 16th January 2015, a severe Tropical Storm, known locally as "Chedza" hit parts of Madagascar bringing heavy thunderstorms across much of the country.