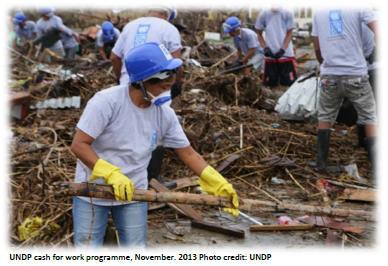 After consulting with the UNDP team in the Philippines, donations raised for the PHILIPPINES TYPHOON HAIYAN APPEAL will support ‘emergency employment generation and small business recovery’ by providing immediate employment opportunities and restoration of livelihood. Given the high incidence of poverty that existed even before the typhoon hit, this initiative will help men and women to become financially independent.

In the immediate to short term of any disaster, many non-governmental organisations respond instantly with emergency aid to ensure food, water, shelter and medical care are provided to the victims. Over the years, The World Federation’s experience has shown that fewer organisations remain on the ground to support victims over the medium to long term. Hence, much of The World Federation’s disaster response strategy focuses on the medium to long-term recovery efforts and our current work in the Philippines reflects this approach.

Efforts are under way in the Philippines to deliver basic services and support the local people to become self-sufficient towards pre-typhoon levels. The ‘Emergency Employment Generation and Enterprise Recovery Plan’ which The World Federation is supporting in the Philippines aims to:

The World Federation will continue to share any updates on this initiative received from the UNDP team on the ground through its weekly newswire and website. 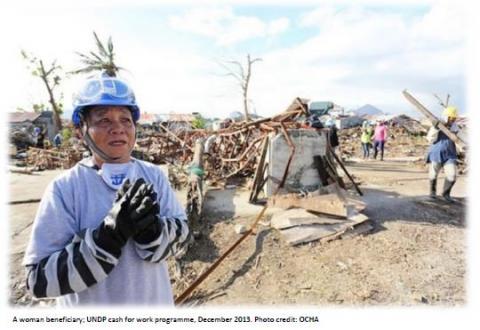 On 8 November 2013, Typhoon Haiyan made landfall in the Philippines, causing extensive damage to life, housing, livelihoods and infrastructure across nine of the country’s poorest provinces. It was the most powerful storm ever recorded where rain fell at rates of up to 30 mm per hour, winds reached upwards of 315 km per hour, and massive storm surges up to 6 metres high hit coastal areas.

The islands of Leyte and Samar were hardest hit where 90 percent of the infrastructure of Leyte’s largest urban center, Tacoloban City, was destroyed. The estimated volume of municipal debris in Tacloban City alone was 1 million m3 (i.e. 10 football fields piled 10m high with waste). Philippine authorities estimate that approximately:

N2K WALK 2014: This Arba’een, raise funds for the displaced people of Iraq

The World Federation is pleased to launch its second annual N2K WALK 2014 fundraising campaign and is inviting pilgrims planning to trek from Najaf to Karbala to raise money for its IRAQ RELIEF FUND to support displaced families in Iraq.

Each year, in the Islamic month of Zilhajj, Muslims around the world celebrate Eid al Hajj, a religious holiday also known as the “Festival of Sacrifice”. This year, this event fell on the Gregorian calendar date of 5th October 2014.

The SOS Program provides seniors living in abject poverty with a monthly income supplement to help meet their living expenses, giving them the opportunity to age gracefully.