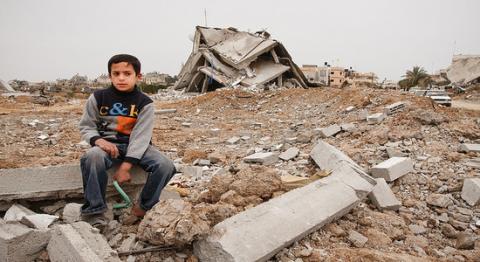 The Ramadhan Relief Program is in progress in Gaza where The World Federation is working in partnership with the United Nations Relief and Works Agency (UNRWA) to distribute food rations to families living in refugee camps.  Over the past several days, however, the region has witnessed a dramatic escalation in violence including a massive assault on Gaza where UNRWA has declared an emergency in the 5 areas that make up the Gaza Strip.

I n response to this crisis, The World Federation is sending more aid to Gaza this Ramadhan. In this blessed and sacred month, we pray for the safety and well-being of all men, women and children living in the Gaza Strip who are affected by the ongoing violence. We pray for a united world where people of all faiths can work and live together for the betterment of all of humanity.

Upon continuous monitoring of the situation on the ground, UNRWA reported on 10 th July 2014 that the deteriorating situation in Gaza was marked by more heavy airstrikes and other fire over the past 24 hours. Latest reports indicate that:

Empty streets, closed banks and majority of markets not open, remains a common theme across the Gaza Strip. It is reported that most Government facilities are not functioning, except hospitals. People in Gaza are scared and fearful of what each new day may bring.

Starting on the afternoon of 10 th July 2014, Palestinian civilians were contacted over the phone in recorded messages from the IDF asking them to leave their houses and move. In total, reports indicate that approximately 300,000 people were asked to move because of an imminent invasion by the IDF. This tactic was used effectively by Israeli forces in 2012, when large numbers of civilians heeded these warnings and displaced themselves. In this instance, the civilian population has largely stayed in their residences.

In an unusual move, the Rafah border crossing with Egypt was opened on 10 July 2014 to allow the evacuation of wounded Palestinians and for those who hold Egyptian citizenship. In total, 510 Palestinians crossed into Egypt.

As well, on 10 July 2014, airstrikes destroyed a water line that provides clean drinking water for Beach refugee camp in Gaza. Efforts are now underway to repair it.

(Above information provided by UNRWA Gaza Situation Report No. 3)

The Palestinian people living in the Gaza Strip are undergoing extremely difficult times. With the violence intensifying each day, families are scared and resources are depleting. Please donate generously to the GAZA RELIEF FUND (part of the Ramadhan Relief Fund 1435) where The World Federation has committed to sending more humanitarian aid to Gaza to bring relief to men, women and children living in refugee camps. Your donation is critical to our work in Gaza this Ramadhan. Thank you for your support.

Muharram 1436: Iraq Relief Fund – ‘A father’s agony and 7 year old Aya with no one to look after her’

Conflict in Iraq due to the violence of the extremist militant group known as ISIS (Da’esh) has forced more than 1.8 million people to be uprooted from their homes, according to the United Nations.

Since the upsurge of the conflict in Syria (March 2011), more than 2.1 million Syrians have fled their homes only to take refuge in bordering countries or within Syria itself. According to the United Nations High Commissioner for Refugees (UNHCR), over 600,000 people have escaped to Turkey, Lebanon, Jordan and Iraq.

In September 2013, communal riots broke out in India’s Muzaffarnagar town in Uttar Pradesh, displacing thousands of people who are now living in relief camps.