One of the objectives of the Millennium Development Goals is to eradicate extreme hunger and poverty. According to the MDG Report 2015:

• Extreme poverty has declined significantly over the last two decades. In 1990, nearly half of the population in the developing world lived on less than $1.25 a day; that proportion dropped to 14 per cent in 2015.

• Globally, the number of people living in extreme poverty has declined by more than half, falling from 1.9 billion in 1990 to 836 million in 2015. Most progress has occurred since 2000.

• The number of people in the working middle class—living on more than $4 a day—has almost tripled between 1991 and 2015. This group now makes up half the workforce in the developing regions, up from just 18 per cent in 1991. 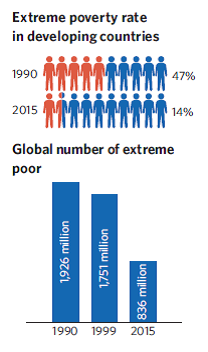 To help eliminate extreme poverty and hunger in our world, The World Federation has worked on a number of initiatives. Some of these programs include:

2.  New housing for over 1,200 families in Tanzania, Sri Lanka and Pakistan. Families affected by poverty and disaster have no choice but to live in make-shift shelters or under the open sky. Our housing program       has improved the lives of over 1,200 families who are sheltered from the cold, rain and hot sun and which results in improved health. As well, women and their daughters have regained their dignity, privacy and       security.

3.  Food ration baskets to over 28,000 families in over 22 countries during the Islamic month of Ramadhan as well as during natural disasters.

4.  Hot porridge breakfasts to over 900 primary students in Kenya to start their day with a full stomach. We have seen both improved attendance and grades of these students.

5.  Seed money to farm 385 acres of farmland in Pakistan to help families get back on their feet after the 2010 flash floods destroyed farmland across Pakistan.

6. Carpentry training for 125 apprentices for the construction of food stalls and 25 cash grants as capital funding to start food stall businesses after Typhoon Haiyan hit the Philippines.

TOGETHER WE MADE A DIFFERENCE!

Alone, we cannot solve all of the world’s problems; together, we can do our part, one person or one family at a time to contribute to the overall well-being of humanity at large. Your support has made this achievement possible and it’s only with your help that we can continue our work.  Please donate to The World Federation’s GREATEST NEED FUND. By donating to this fund, you are entrusting The World Federation to distribute your gift to generate the greatest impact (i.e. to spend your contribution wherever the need is the greatest at any given time).

Bilal Muslim Mission Tanga Branch organized various functions and events in order to commemorate the Martyrdom of Imam Hussain (The grandson of Holy Prophet (S.A.W)), which took place in the plains of Karbala.

The World Federation of KSIMC is excited to introduce our daily 'Shahr Ramadan - Feed Your Soul' series. Click here to watch videos uploaded so far.

Muharram 1436: Iraq Relief – ‘Welcome a Family’ with a Home Comfort Kit – Najaf, Karbala and the South of Iraq

According to the United Nations, Iraq is struggling with one of the largest internally displaced populations in the world where an estimated 1.8 million people are displaced at the hands of the extremist insurgent group known as ISIS (Da’esh).