Low attendance in schools and access to education is directly linked to poverty. One of the objectives of the Millennium Development Goals is to achieve universal primary education. According to the MDG Report 2015: 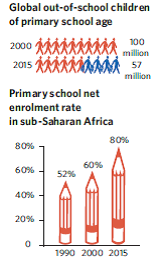 • The number of out-of-school children of primary school age worldwide has fallen by almost half, to an estimated 57 million in 2015, down from 100 million in 2000.

• Sub-Saharan Africa has had the best record of improvement in primary education of any region since the MDGs were established. The region achieved a 20 percentage point increase in the net enrolment rate from 2000 to 2015, compared to a gain of 8 percentage points between 1990 and 2000.

To help achieve universal primary education in our world, The World Federation’s Zainabiya Child Sponsorship Scheme provides children and youth access to education so that they can break out of the vicious cycle of poverty. ZCSS sponsors students who come from low income households and cannot afford school fees with the opportunity to go to school. The program caters for learners attending pre-school, primary school, secondary and post-secondary institutions.

The World Federation has spent over 30 years educating students. Currently, the program is sponsoring 4,291 students across India, Pakistan, Bangladesh, Kenya and Tanzania where 2,431 students are male and 1,860 are female. 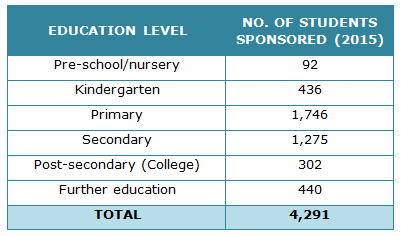 In 2014 and 2015, The World Federation gifted 85 sewing machines to women in Pakistan who lost male breadwinners in their families to targeted killings.

Every Monday we will release one thoughtful video from now until the rest of the year. Find out more here.